The announcements made by the Venezuelan government on the vaccination policy against COVID-19 in the country have not been free of accusations and controversies created by opposing political actors in the health sector, as has been seen in the Venezuelan diatribe in recent days.

It has been reported that the Espromed Bio plant, located in the University City of Caracas, will produce the Abdala vaccine, one of Cuba’s main vaccine candidates. This was announced by Executive Vice-President Delcy Rodríguez during an inspection of this Venezuelan technobiological products facility together with a delegation of Cuban pharmacists in charge of developing this drug.

At this plant there are currently five projects underway in cooperation with Cuban biotechnology companies, which will be joined by the mass production of the Cuban vaccine, which is still in Phase III clinical trials pending its certification by the World Health Organization (WHO).

The Venezuelan government also announced that the country managed to finalize the payment of 50% to access more than 11 million vaccines from the COVAX System of the United Nations and the WHO. For now, it has not been announced which vaccines will arrive in the country through this system.

Venezuela has previously signed agreements with Russia and China, the SputnikV and Sinopharm vaccines have arrived in the country and have allowed the vaccination process to be carried out among health personnel, social workers and the elderly population, as has been reported in the Venezuelan media in the last few days.

Venezuelan policy is multidirectional in an adverse environment. In addition to receiving vaccines from allied countries and the vaccines that will come through the COVAX System, Venezuela will join the very short list of countries in the world that will manufacture some of the available and certified vaccines, as is expected to be the case of Abdala.

But along with these announcements, the construction of anticipated polemics and narratives has not been long in coming, since they have been instrumentalized for the manufacture of a new “humanitarian crisis”, this time, for vaccines.

The serious context of the global vaccine crisis

On this subject, it is essential to refer to the global picture regarding vaccines. The road to global immunity against COVID-19 began: on April 8, vaccination against the coronavirus exceeded 5% of the population with at least one dose, an inoculation that has now reached more than 459 million people. In total, and according to data collected by Our World in Data, more than 825 million injections have been administered in almost 180 territories and countries. However, there is a big difference between continents, reports the Spanish media RTVE.

In fact, at the end of March, the WHO stated that with each passing day, inequity in access to vaccines against COVID-19 is becoming more and more evident and reproached the developed countries, which have monopolized most of the antidotes, for doing little to reverse the situation. 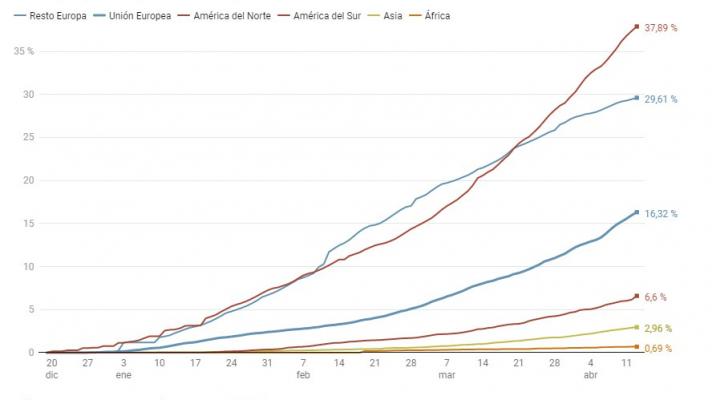 The seriousness of the dispute makes countries vulnerable and, in fact, it has been countries such as Russia and China that have contributed to mitigate the situation. In Russia, by the second week of April, the country had vaccinated only 11% of its population, while China had vaccinated only 5% during the same period. However, vaccines from these countries have reached more than 130 countries and many of these countries would not have received any vaccine to date had it not been for the Federation and the People’s Republic.

Venezuela is in an even more adverse situation. In this situation of world vulnerability, Venezuela is additionally burdened by the economic and financial blockade against the country, which made the simple payment to the WHO COVAX system, in practical terms, a feat for the Venezuelan government.

All this indicates that Venezuela, in addition to the yet to be demonstrated response capacity of the COVAX System, will have to rely on its allies in order to be able to vaccinate the population. In these instances, acquiring these vaccines and manufacturing Abdala in the country will be the mechanisms through which the country will resolve the access to the antidotes within the corresponding lapses.

Operations of political actors in the health sector

Before Venezuela announced the manufacture of the Abdala vaccine in the country, the National Academy of Medicine (ANM) published a bulletin on March 22, where they questioned vaccinations in Venezuela with Abdala.

The ANM did not claim to have access to information on the vaccine, however, and in advance, they established doubts and accusations against the drug on the grounds of its country of origin.

In an ostensibly technical manner, they stated that the drug was not certified by the WHO which indeed still is the case, however, they did not mention that the drug is part of the WHO’s vaccine development monitoring. Prior to the ANM’s statements, Dr. José Moya, representative of the WHO and the Pan American Health Organization (PAHO) in Cuba had stated that the Abdala vaccine was under development and was going “quite well”.

Following this statement, Dr. Huniades Urbina, secretary of the ANM, advocated for the entry of the AstraZeneca vaccine, even though several countries and international pharmaceutical authorities have warned of its risks.

After the ANM anticipated the rejection of the Abdala vaccine, creating a negative precedent and sowing doubts in the population, the Venezuelan Medical Federation (FMV) pronounced itself in favor of vaccines for “all medical personnel”.

Together with a minuscule representation of “health personnel”, Douglas León Natera, an open anti-Chavista leader in the health sector, presented posters and messages requesting a massive vaccination plan, “safe and without exclusions for all Venezuelans”, accompanying their denunciations indicating that vaccination in Venezuela is “exclusive for Chavistas”. 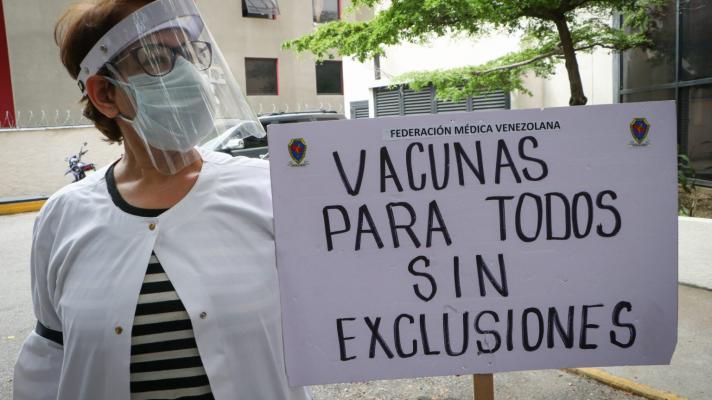 The FMV pointed out that 456 health workers have died. But in contradiction and amplifying the figure, the organization Doctors United of Venezuela (MUV), another anti-Chavez movement which has been in charge of “counting the deaths”, affirmed that there are 468 deaths of health workers up to April 12. This means, according to MUV, that of the 1,795 official deaths, 26% represent nurses, doctors and other types of health care personnel as of that date.

Meanwhile, Dr. Julio Castro, an infectologist and opposition activist, questioned the use of the Plataforma Patria to call for the vaccination of the elderly. He also used the word “exclusion” in the vaccination system, without mentioning the global crisis of access to vaccines.

Castro omits that the Patria Platform is an instrument that has proven to be effective to make information flow in a bidirectional way between the population and the national government in real time, with the Patria System being the most opportune to monitor indicators as an online survey and info-government, because it is linked to the Carnet de la Patria and because it is freely accessible by the public.

Additionally, for Julio Castro, the Cuban Abdala antigen “cannot be considered part of the vaccination program because Phase III has not even been completed and he does not believe that it will be completed until the end of this year”, as he said to the media El Estímulo. Furthermore, Castro said that in order to be considered as a vaccine, it must be tested and endorsed “by the world scientific society”.

Castro omitted that the Abdala vaccine will comply with Phase III well before the end of the year, that its development is monitored by the WHO and that Cuba plans to vaccinate its population on a massive scale before the end of the year, specifically from June-August with the Soberana 2 vaccine. Hence, their misunderstanding of vaccination schedules in Cuba and their doubts about Abdala seem more like narrative manipulations generating uncertainty.

On April 6, a minuscule group of medical students from the Central University of Venezuela, made a statement in a staged event in front of the University Hospital of Caracas, with garbage bags packed like body bags. In this event, they demanded vaccination in the country, and their statement was widely disseminated by international media and NGOs to argue a “humanitarian crisis due to lack of vaccines” in Venezuela. 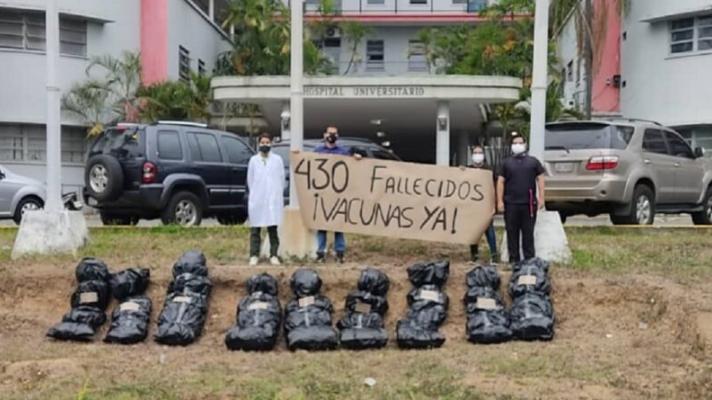 As expected, in this staging there was also no mention that according to the Venezuelan Minister of Health Carlos Alvarado, -who was one of the public servants who has suffered from COVID-19- more than 200 thousand people in the country had been vaccinated with at least a first dose.

In fact, and as reported by the Venezuelan authorities, part of the vaccinated health personnel in the country have been those who have worked in Sentinel Hospitals and Integral Diagnostic Centers (CDI), instances of the public sector where COVID-19 cases are exclusively attended, a matter that doctors in private clinics and who are not attending to the pandemic call “discrimination”. However, they will eventually be vaccinated.

The exponential manufacture and placement of another “humanitarian crisis”.

The clear alignment of these actors of the health guild are not unrelated to matrices promoted by leaders of the Venezuelan opposition, specifically those led by Juan Guaidó, who have persistently disseminated the existence of a “humanitarian crisis” in Venezuela due to lack of vaccines and have built the story of alleged political “discrimination” for vaccinations. This, despite the images of massive vaccination operations for prioritized citizens among the elderly and those at risk.

These issues have been more strongly emphasized since the Venezuelan government’s rejection of AstraZeneca, officially vetoed in several countries and scientifically catalogued as risky, last March.

Additionally, the increase of COVID-19 cases in Venezuela due to the rise of the Brazilian strain in the region, has been instrumentalized to expand these narratives, promoting before the “international community” the existence of a crisis of Dantesque proportions.

It is worth noting that these narratives have been polyfunctional, as they seek to divert attention from the factual issues, on the role of Juan Guaidó’s fake government to scam, divert and steal the country’s resources that are under the arbitration of the U.S. government and other allies.

The preceding events record that in exchange for political perks and under orders from the Americans in the framework of behind-the-scenes negotiations, Juan Guaidó attempted blackmail for the dismantling of Venezuela’s political power using national resources and access to vaccines as a weapon to apply pressure.

Hence, the interpretation of these movements that are observed between the opposition forces and the health guild have a sophisticated timing that is only projected to be extended, given that due to the conditions of global access to vaccines, the implementation of COVAX for the country and the remaining time lapse for the Abdala in Venezuela, vaccination will not be an immediate process.