Against this backdrop, the United States has decided that it is best to look to the past and return to the best possible scenario for its interests. From Trump's "Make America Great Again" to Biden's "Rebuild the World Better", all their initiatives already look back with nostalgia to the time that has passed and evidence the imminence of change that does not favor them.

But while the growing power of China and Russia aims at building a multipolar, or at least a tri-polar world, the United States is once again trying to divide the world in two: those who are in its favor and those who are against it, to return to the bipolar world in which it was able to manage for more than four decades.

The problem with Latin America and the Caribbean is that, in this attempt to split the world in two again, controlling it is essential for the United States, which considers it so much of its own, that it sees any insubordination of the sovereign state or a rebellion of its peoples as a problem of internal security.

During the Conference of the Parties to the United Nations Framework Convention on Climate Change 26 (COP 26) being held this year in Scotland, Joe Biden once again presented the Build Back Better World (B3W) initiative that had already been launched a few months ago at the G7 meeting, which the United States intends to use to compete with China's Belt and Road Initiative in order, in the first instance, to halt the advance of the Asian giant in the region.

At this Conference he was accompanied by representatives of the G7, including the presidents of Colombia, Ecuador, Panama, and Costa Rica, who that same day agreed on the creation of a Marine Corridor of the eastern tropical Pacific, which in principle is proposed as the expansion of protected maritime areas for the conservation of biodiversity, covering the Gorgona National Park and the Malpelo flora and fauna sanctuary in Colombia; Cocos Island in Costa Rica; Galapagos in Ecuador; and the island of Coiba in Panama.

The reality is that this 500,000 square kilometer belt is included in the infrastructure plan presented by Biden and is proposed as an "ecological fishing-free zone", specifically to prevent fishing by Chinese vessels. 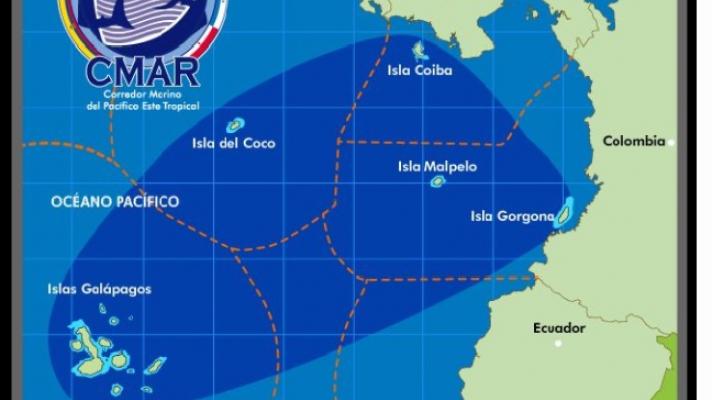 The most important aspect of this agreement is the military activities in the Galapagos archipelago, which the former Minister of Defense of Ecuador, Oswaldo Jarrín, described as a "natural aircraft carrier", at the time when the government of Lenin Moreno authorized the United States to expand the San Cristóbal airport located on the island territory for the installation of radars and the operation of U.S. aircraft.

Despite the fact that Iván Duque fulfilled the assigned task of shaping this belt in the Pacific to articulate it to the B3W, his relations with the current US government are scarce, although this does not prevent military coordination to continue its course or advancing the economic interests of the United States in Colombia.

This is a piece of evidence demonstrated by the three high-ranking U.S. Government officials who have visited Colombia in the last two months.

In September, Craig Faller, who had been appointed by Donald Trump, was in Colombia during his last tour of the region before handing over his command of the Southern Command to General Laura Richardson.

A few days later Daleep Singh, deputy national security advisor to the current U.S. President, arrived. Singh was accompanied by David Marchick, director of the United States International Development Finance Corporation; Ricardo Zúniga, principal deputy assistant secretary of state for Western Hemisphere Affairs and special envoy for the Northern Triangle; as well as officials from the United States Agency for International Development (USAID), the Department of Commerce and the Department of the Treasury. Singh's fundamental task was precisely to move forward with the B3W and, judging by his tour, the formation of this belt in the tropical eastern Pacific.

The cycle of visits was closed by Anthony Blinken, Secretary of State, who in the press conference he gave together with the Colombian President, complained about the human rights violations that occurred in the context of the repression of the National Strike in Colombia. Certainly, to satisfy the demands of his NGOs and some sectors of the U.S. Democratic Party and, more than anything, to wash his hands of the crimes committed with his definitive financial, police, and military support before public opinion.

Blinken also emphasized the importance for his country the migratory crisis of the Haitian men and women who have arrived at the Darien plug, border of Colombia with Panama, mostly coming from Chile. He emphasized the incorporation of Colombia into the B3W initiative.

However, since Biden assumed the presidency in January of this year, no meeting between the presidents of the two countries had taken place until the last COP26 summit, despite the enormous efforts of the pro-Uribe president who even went to Washington twice this year. Adding another reason for the Colombian oligarchy to perceive the urgency of a definitive exit of Uribism from the Casa de Nariño.

For this reason, Duque exaggerated in the media his greeting with Biden during that short meeting for the launching of the B3W, but the truth is that the Colombian president was just one more and never managed to have a bilateral meeting with the head of the White House.

It is evident that Biden has no interest in being linked to Uribism, who closed ranks with Trump during the last U.S. elections and is approaching an electoral debacle. It is foreseeable that instead, the White House will decide to support more moderate or even progressive candidacies in the upcoming elections in Colombia and for similar reasons in Chile. Moreover, although there are elements to think that Trump could return to the U.S. Presidency in three years, these are bad times for Uribism.

Without the umbrella of the U.S. Presidency, what seems to be Uribe's last government is looking for a strategic refuge and has turned to no less than the protection of the powerful Zionist lobby that has so many tentacles in Colombia.

That is why a few days ago Colombia recognized Western Sahara as Moroccan territory, following in Trump's footsteps to bring Morocco and Israel closer together. This constitutes a serious disregard for the history of the Saharawi people and even for the dispositions of the UN.

Ten days later, the Colombian president began his first visit to Israel, where he began by speaking out about the free trade agreement and ended by discussing the new military coordination to combat what the Zionists call "international terrorism". The renewed support of the Zionist State announces new war scenarios in which Uribism views its salvation plank.

With this maneuver, Duque managed to change the most important photo of the week to describe the role of the Colombian government within imperialist geopolitics. The image of the distant greeting given by Biden at COP26 was displaced by that of the first Colombian president kneeling in front of the lamentation wall.