From the valley of the Santo Domingo river comes a strong wind called “Barinés” that descends from the Andean mountain range in a west-east direction during the rainy season, against the prevailing trade winds in most of the country. Contrary to what a decadent political class dedicated itself to decompose at the end of the XX century, Comandante Chávez emerged from these lands, at the time when the neo-liberal offensive was beginning to dismantle the Nation-State by the hand of the traditional parties.

The idea of an oil enclave without identity or destiny replaced Bolivar’s homeland and it was Chavez who, bringing Bolivar himself to the center of the imaginary, took back the libertarian and independent sense of the only country in the hemisphere whose troops transcended its borders to take sovereignty to other territories.

Hence, the answer to the question that heads this text goes beyond the symbolic without ceasing to be symbolic.

A symbolic connection in dispute

Beyond formulas and sentences, which normally end in proclamations and slogans, there is that which the elites of the continent have always feared, fear and will fear: The connection between Chávez and the people.

When one says “people” one does not speak of a herd engrossed in speeches and promises but of the open protagonist of a struggle whose victory consists in being people. When we say “Chávez” we speak of the man and the ideas, also of what has allowed us to believe in ourselves.

Winning in Barinas is about putting megawatts to that connection that “own” and strangers have tried to undo, it is about recomposing that which they have tried to break by trying to erase Chávez from our collective memory. For Chavismo, it is more than a symbolic and moral issue, it is part of our language and actions.

(Anecdote in parenthesis: The news tells of a young man who, in the midst of the siege to Venezuela, emigrated to Chile and after a few days of having arrived in that country, he saw how a group of police officers beat a Haitian for evading public transportation in Santiago. He came to his defense and ended up, not only in jail, but suffocated and insulted with xenophobic comments, in spite of the fact that he tried to dialogue. In that young man was Chávez, even though he himself denied it).

Let us continue with Barinas: The strong wind that blew our history from Barinas has made this state a place with meaning, that the epic of Santa Inés, conveniently forgotten by our educational system, imposed itself with force in a war without cannons declared by a cruel enemy.

“The wind of Barinas fans the candles

the sun of victory shines in Santa Inés”.

To wait for the enemy, to gain time even if space is lost, to be implacable in the counterattack, to resist even when the same left forgot to name us or invite us, to advance against the grain… always and still. That is Chavismo.

Since the Commander-in-Chief changed his plan, they thought they would manage to surrender us, we have won election after election since they surrounded us in 2015. To the point that, in the past 21N, for the first time in a long time, we went to vote without fear of anything, and this is no small thing. We come from more than eight years of intense aggression, assassination attempts, invasions, queues, shortages, gasoline and cash smuggling, blackouts, guarimbas, food hoarding, blockade of vital supplies, denied medicines, postponed surgeries until the death of patients, looting of assets and even cocuy puyao. 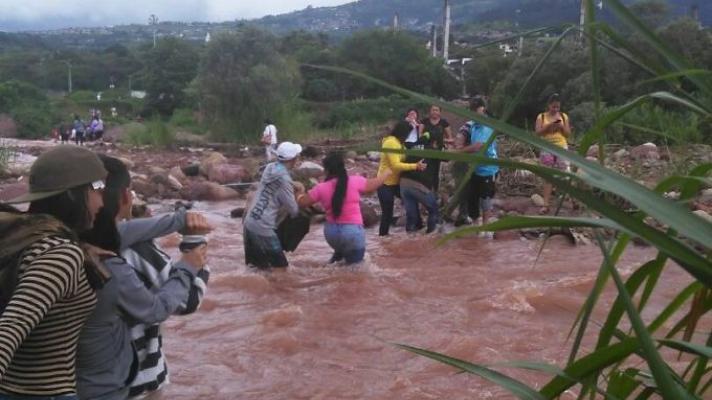 Chavismo has become accustomed to measure itself at the height of the circumstances, thus we faced every challenge, our epic comeback began with the election of the National Constituent Assembly, continued with the elections of governors, mayors and even the President of the Republic. Last 21N, also on December 6, 2020, we demonstrated the conviction that the vote is the gateway to a protagonist and participatory democracy, the next elections to be held in January 2022 will not be the exception.

Stopping the germination of the para-state

In Barinas we have seen how the Venezuelan opposition has a faction aligned to Uribism that, for some time now, has sought to sow a para-state in western Venezuela. In that task, José Geraldo Rojas, Manuel Cordero, Alexi Ontiveros, Eudes Rojas, Kebin Navas Rodríguez and Milaidis Navas were murdered in 2019. As denounced by several social movements, in those days the so-called Autodefensas Colombo Venezolanas had attacked military units of the Bolivarian National Armed Forces and systematically threatened security forces and Chavista militants.

First vice-president of the #PSUV, @dcabellor: We demand an absolute investigation, that reaches those responsible for these deaths in Barinas. It is violence that comes imported from Colombia. Our solidarity with the peasant movements.#UniónRevoluciónYPaz pic.twitter.com/DzJlEP4MVV

In August 2018, President Nicolás Maduro denounced the murder of spokespersons of the peasant struggle in Barinas. The deceased, who had participated hours earlier in a presidential event, were named Reyes Parra and José Aguilar, spokespersons of the Council of Socialist Producers Los Lanceros de la Pascualina de Zamora, were intercepted at the La Escondida farm, gagged and transferred to the El Maranao farm, where they were shot. The mastermind, a landowner named Ricardo Mora, was captured by Interpol in Bogota, Colombia, as were the executors of the order.

Also in May of that year, Jesús León and Guillermo Toledo were kidnapped and murdered by Colombian paramilitaries. They were part of a group of peasant families that have disputed the ransom of 336 hectares of a ranch called “Palo Quemao” in the Arismendi municipality of Barinas state. 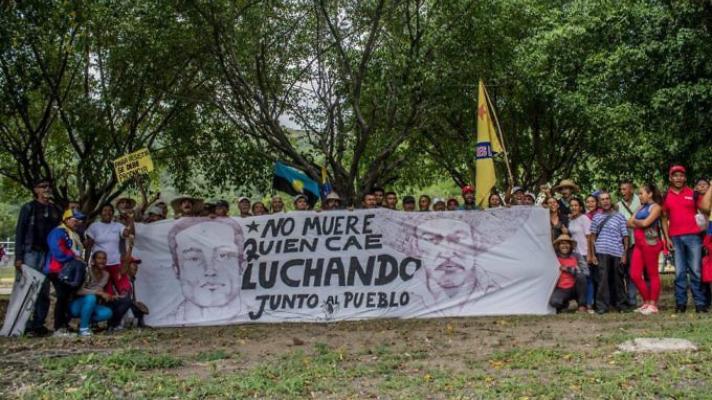 Curiously, the cartelized media, so lax in denouncing any media matrix against Chavism, have scattered headlines with terms such as “supposedly”, “Chavism denounces…” and the like. In addition, on the occasion of the massacre of peasants who had just met with the Venezuelan president, media such as NTN24 headlined “Meeting with Maduro without effect: Murder reported…”, as if to leave no doubt as to the game that has been being played.

It is clear the determination of the U.S. establishment to make Venezuela the scene of a civil war, in which the Duque administration has worked to the point of losing its shame. Even in the midst of the pain caused by the blood of more than 370 peasants shed in the framework of the violent escalation promoted by the regional right wing during these 23 years, Chavismo has known how to wait without becoming demoralized.

that blooms in the savannah:

I give scent to those who pass by

and hawthorn to those who shake me.

– “Florentino and the Devil” by Alberto Arvelo Torrealba

It is also said that they called Barinas to a low, thorny bush, with yellow flowers, that abounds in the high plain, it is called Espino Amarillo, Espinito, Flor Amarilla and Flor de Barinas (Cassia aculeata). Causalities abound.

The peasantry has been and will be a war target for anti-Chavismo because it has played an important role in the Bolivarian Revolution, especially when, due to the illegal sanctions imposed against Venezuela by the global corporate network, the importation of food, seeds, fertilizers, machinery and other basic needs has been restricted and the response of the small and medium scale peasant people has been to resist.

When the imperial calculation was based on inducing food shortages to increase hunger in Venezuela, instigate popular chaos and force the overthrow of the government; agricultural producers opted for measures and actions to defend national sovereignty and build food sovereignty.

Both in Barinas and in other states that concentrate up to 70% of the peasant sector and people involved in food production, several peasant associations, cooperatives and communes have formed productive alliances on a scale that includes processing and distribution in their communities and beyond.

The landowners have responded to the war against the latifundia declared since 2002 with violence and massacres deployed by paramilitaries brought from Colombia, but the thorns of the countryside are flourishing again, giving scent to those who pass by and thorns to those who wag them…

For that right wing it is fundamental to take over Barinas and serve as a hinge against incursions from the states of Apure and Táchira, both of paramilitarism and its oxygen, which is drugs. Likewise, to establish a bottleneck for the transportation of food, produced in those states and which is of vital consumption in the center of the country, it is well known their habit of resorting to terror and hunger for that storm of massive extortion that they called “interim government”.

In Barinas they unleashed hatred and anti-politics during the guarimbas of 2017, with waves of violence in which there were up to 6 deaths and burnings of up to 30 establishments, including the headquarters of the United Socialist Party of Venezuela, the Cabildo of the city of Barinas, the National Electoral Council, the Executive Secretariat of Education, as well as the Autonomous Institute of Housing and Neighborhood Equipment of Barinas state, which saw its offices ransacked and several of its vehicles set on fire.

At that time, the work of former candidate Superlano was to predict deaths that did not occur while the economic losses increased, worsening the situation already caused by the economic sabotage. It was also evident the narrative interest of the cartelized media in Chavismo losing support in a bastion such as Chávez’s home state.

One of the most important military actions of the Federal War (1859-1863) took place on December 10, 1859 under the command of General Ezequiel Zamora, who together with federal troops headed towards Barinas in pursuit of General Pedro Ramos, leader of the Governmental Army of the West.

The federal troops retreated to the bank of the Santo Domingo river, within the framework of a strategy known as retardatriz action, where they gathered forces and on December 9 they were organized in three combat lines. Zamora managed to lure the attacker to an area known to his troops and then ambushed them later in Santa Inés, defeating the enemy side. 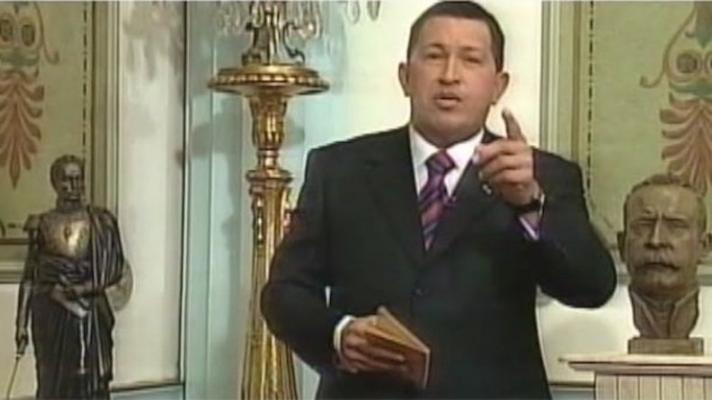 Since that 2004 referendum, in which Chavismo attracted violent fascism and coup plotters to the electoral field, until today, the same play seems to be repeated. Chavism, now led by Maduro, attracts to the arena of elections, debate and laws the same opposition bent on anti-politics. In spite of itself, of its divisions and its flip-flopping from Washington, this opposition has participated in the elections which are, as it has been said, the entrance to a participative and protagonist democracy.

It is still necessary to continue building politics so that the debate between the two opposing models allows us to advance in peace towards scenarios that purge what harms the people and we can be people with rights that build a culture that defeats poverty and exclusion of all kinds.

Eder Peña: Biologist graduated from UCV. He is currently part of the scientific staff of the Venezuelan Institute of Scientific Research in metals in plants, political agroecology and nutritional dynamics in agroecosystems. Facilitator at the Universidad Bolivariana de Trabajadores “Jesús Rivero”. He can be contacted @ supereder@gmail.com