On March 13, the Russian army destroyed the training centers of the Armed Forces of Ukraine at the Yavoriv training camp and the town of Starichi, where foreign mercenaries and volunteers were trained.

The attack targeting that military facility in Lviv region was confirmed by the Russian Defense Ministry, which claimed that 180 mercenaries and a large batch of weapons had been destroyed.

After this attack, some foreigners who had gone to Ukraine to fight on the Ukrainian side decided to return home immediately. The images and videos of their testimonies began to circulate on social media, and among them were Brazilian mercenaries, such as Jefferson Kleidin, who, after crossing the border from Ukraine into Poland uploaded a photo of his bandaged hand with the text: “Thank God for another day in life. Sad for the friends who lost their lives in the attack on our base.”

Another Bolsonaro supporter cosplaying with the foreign mercenaries in Ukraine made it out of the training base near Mukachevko before the Russian missile strike. From Poland, Jefferson Kleidian posted a selfie on his socials, thanking God for another day of life. pic.twitter.com/6d3PjFupQI

The participation of foreigners from a country geographically so far from Ukraine is quite surprising. However, regarding the strengthening of right-wing extremism and neo-Nazi groups, Brazil, led by the government of Jair Bolsonaro, already has had visible and notorious connections with Kiev.

She went to Ukraine and became FEMENazi: the story of the Brazilian Sarah Winter

In an article for MintPress News, journalist Brian Mier gave a concise historical review of how and when the neo-Nazi trend started in Brazil.

During the 1930s, Brazil was home to the largest German Nazi party outside Europe, and also had a much larger home-grown fascist movement called the Integralistas which attempted a coup in 1938. The coup failed, but the ideology endured for a long time in a country that already suffered from severe structural racism, being the last country in the Americas to abolish slavery.

However, in recent history this phenomenon has been growing with greater force, especially with the rise to power of the current President of Brazil, Jair Bolsonaro. Available data confirms this. Since Bolsonaro became president in 2019, neo-Nazi groups in Brazil have grown by 270%. Currently, there are 530 neo-Nazi cells operating in the country, according to anthropology professor and researcher on fascism, Adriana Dias.

Brian Mier’s article also reviews a contemporary episode that explains how Ukrainian neo-Nazi groups, such as the Azov Battalion, have established contacts in Brazil. An example is the case of Sara Fernanda Giromini, alias Sarah Winter, a woman from São Paulo who, as a young teenager already associated with right-wing extremist groups in Brazil, met Ukrainian and Russian neo-Nazis through the social media platform VK. In 2011 she traveled to Ukraine, where she was received and trained by the organization FEMEN. Back in Brazil, she formed a cell of the organization in her country.

FEMEN Brazil closed after a series of allegations of sexism and corruption. FEMEN Ukraine claimed that it had nothing to do with the Brazilian organization or its founder, a clear contradiction with the facts, since in 2012 Giromini was arrested during a FEMEN protest in Kiev. Giromini says that she was paid $2,000 to protest in the streets of the Ukrainian capital. 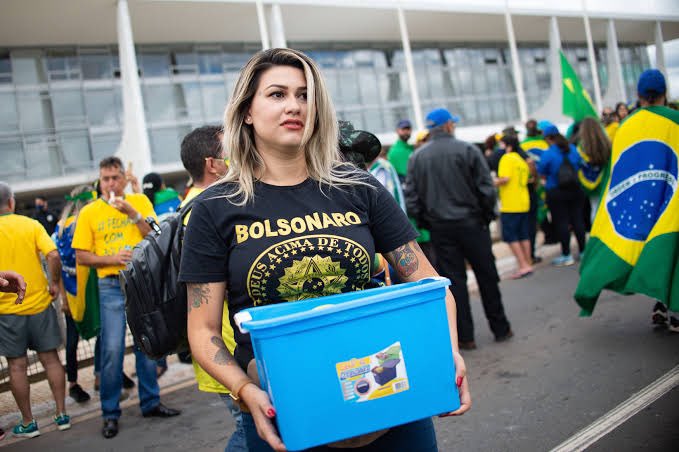 FEMEN Brazil ended but Giromini did not give up her neo-Nazi contacts with the Azov Battalion and the Phoenix Battalion, and began inviting them to Brazil.

In 2016 it was discovered that the Azov Battalion was recruiting volunteers in seven cities in the southern state of Rio Grande do Soul, a place with a strong fascist tradition, to take them as volunteers in combat in the Donbas region.

Giromini campaigned for Bolsonaro’s candidacy, and once he took office, she began to publicly call to “Ukrainize Brazil.” In Mier’s words:

Giromini, by this time a vocal member of the anti-abortion movement, campaigned heavily for Bolsonaro. After he took office in 2019, she began a public call to “Ukrainize Brazil.” Many of the most reactionary public figures associated with Bolsonaro, like openly fascist Rio de Janeiro lawmaker Daniel Silveira, joined the campaign. Professor Dias says, “Azov’s tactic has always been to bring a group of 300 people to a city and, through training activities with locals, start a right-wing extremist movement.” Giromini relocated to Brasilia and started an organization called the “group of 300” to help build support for the Ukrainization of Brazil.

In 2020, after the Brazilian Supreme Court blocked one of Bolsonaro’s attempts to bypass the Constitution, Giromini’s group of 300 camped out on the national esplanade, held a series of tiki torch-wielding protests in front of the court building and shot fireworks at it. Posing for selfies with guns, she cited for violence against Supreme Court Ministers; on July 15, 2020, the Supreme Court ordered her arrest. After two weeks in jail, she was given an ankle bracelet, transferred to house arrest, and ordered to stay off social media. She has been there ever since.

Meanwhile, the presence of flags and symbols of the Ukrainian far-right became more and more common in rallies by Bolsonaro supporters. According to Brian Mier:

In 2020, a former soldier and security consultant named Alex Silva, who has been living in Kiev since 2014 and says he is a member of an “auxiliary volunteer police force” there, triggered a media controversy that led to an official disclaimer from the Ukrainian Embassy when he hoisted a red and black Pravyi Sektor flag onto a sound truck at a Bolsonaro rally and was photographed walking through the crowd wearing it like a cape.

Silva became an internet celebrity for Brazilian right-wing groups. Back in Kiev, he has been uploading videos of the armed paramilitary gangs he leads.

The MintPress article quotes Leonel Radde, a Porto Alegre councilman who has researched neo-Nazi groups in Rio Grande do Sul. Radde points out that from the symbols these groups adopt to the tactics they use, they are copies of the neo-Nazi movement in Ukraine, especially their actions in the 2014 coup.

What is yet to be determined is whether the Brazilian groups spontaneously copy this model from what they see on the internet or whether there is Ukrainian or Western funding behind it. It should be noted that Giromini “spent time near Porto Alegre doing organizing work and she started this whole thing,” says Radde.

We are seeing one of the immediate consequences of this today in Kiev. Dozens of Brazilians trained in neo-Nazi cells have enlisted in the Ukrainian embassy in Brasilia to support the foreign far-right movement that influenced them.

Although the Brazilian reinforcements have not been useful in stopping the “denazification” operation carried out by the Russian Armed Forces in Ukraine, they remain a threat in Brazil, by organizing—and in the case of Bolsonarism, promoting—the spread of extremist ideologies and the consolidation of armed cells that defend them.