The geopolitical magnifying glass has been turned on the Black Sea in recent days due to the provocative actions of the North Atlantic Treaty Organization (NATO) against Russia.

This and other events, such as the recent G7 Summit, show clear signals about the archaic stance that Western countries will maintain against the powers of the Eurasian region: Russia and China.

In response to the global framework, two important articles were published written by Russian President Vladimir Putin and Foreign Minister Sergey Lavrov, whose central ideas are set under the intentions of his government to promote relations of equal cooperation with Europe, emphasizing respect for sovereignty.

Just as President Putin stressed that “we simply cannot afford to carry the burden of past misunderstandings, grievances, conflicts and mistakes”; Lavrov clarified, once again, that they remain open to honest dialogue within the framework of respect for international law.

“To be open, despite the past” by Vladimir Putin

This article was published for the German weekly newspaper Die Zeit  on June 22, the 80th anniversary of the Great Patriotic War.

After a historical review of the war against Nazi Germany, President Putin recalled the meaning of that Soviet feat, since the Red Army not only defended the independence and dignity of their nation, but also saved Europe and the rest of the world from slavery.

Following the historical line, the Russian president explained that after the outbreak of the world war, Europe restored confidence and the then Soviet Union achieved the historical reconciliation with the united Germany, a milestone that was embodied in the “agreement of the century” of 1970, which although the fundamental thing was the preservation of international peace, they also agreed on the consequent strategic support in the supply of natural gas to Europe.

This raised the pillar of the alliances between the two axes, which from a geographical point of view alone, due to their proximity to any agreement, and especially those of an energy nature, are fundamental for the stability of the region.

The Nord Stream gas pipelines and its extended version, Nord Stream 2, linking Russia with Europe through the Baltic Sea, are crucial elements of the constructive interdependence mentioned by Putin in his paper. The transportation cost advantages for Russia’s gas supply to Europe are enormous, the vast pipeline network and infrastructure no small thing.

Thus, Russia has long been the dominant source and supplier of natural gas to Europe’s mass market. According to Gazprom, Russia’s main gas company, a total of 198.97 billion cubic meters of gas was supplied to European countries in 2019, equivalent to 77% of exports to Western Europe and Turkey, and the rest – to Central Europe.

On the other hand, Putin covered the issues of security and cooperation, evoking that Russia has maintained the logic of building a “Great Europe united by common values and interests”. However, he emphasized that the expansion of NATO was in itself a “relic of the Cold War”, as it further drew the dividing lines of that continent and created mutual distrust.

Based on that, the Ukrainian context emerges as an example of aggressive policy, indicating that Europe actively supported the unconstitutional armed coup in Ukraine. But beyond that, European NATO member countries are reinforcing this aggressive policy today, as a British warship sailed through Russian national waters a few days ago.

In response to that fact and without masks, British Prime Minister Boris Johnson claimed that he does not recognize the annexation of Crimea to Russia and that for them those are Ukrainian waters, generating notorious tensions in the Crimean peninsula.

In times like these, with Russia and China as leading countries in the promotion of international relations framed in the respect for sovereignty and equitable cooperation among nations, the geopolitical posture of permanent conflict of Europe together with the United States is in the pit of decadence. In the face of this, the Russian president’s response was precise:

We are missing the tremendous opportunities offered by cooperation, which is all the more important now that we all face common challenges, such as the pandemic and its dire social and economic consequences. 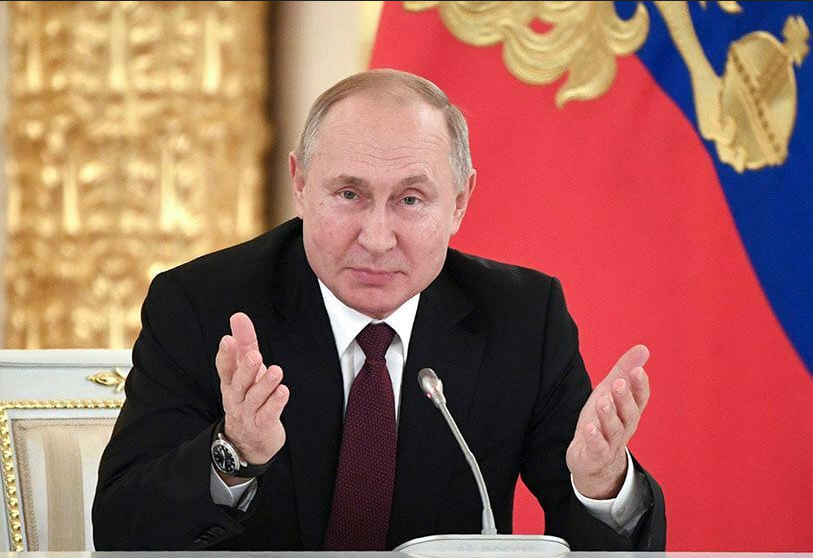 “The Law, the Rights and the Rules” by Sergey Lavrov

As a complement to President Putin’s emphatic article, an article authored by Russian Foreign Minister Sergey Lavrov was published on June 28 on the web portal of the Ministry of Foreign Affairs of the Russian Federation, in which he details the current geopolitical arena and Russia’s role in the face of European and American details.

At the outset, he highlights a series of events that intersected prior to the recent bilateral meeting between the Russian president and his US counterpart, Joe Biden, namely in their chronological order:

In evoking these facts, Lavrov maintains that these meetings were held to show European unity and the will for other countries, such as Russia and China, to enter the lane imposed by the West in order to move in international affairs.

From this argument, the Russian diplomat goes on to explain that the product resulting from these meetings is based on the promotion of the idea of the “world order based on rules”, that is to say, on the rules of this small group of countries that dissociate themselves from the universal principles of International Law.

As far as rules are concerned, Lavrov gives a detailed description of the West’s use of them:

This imposition of rules brings to mind Biden’s speech in January 2020, when he presented the plan to hold a World Democracy Summit for the purpose, he said, of “honestly confronting the challenge of nations that are backsliding and forging a common agenda to address threats to our shared values”. This is the “renewed” foreign policy path of this new administration perfumed with Obama’s tactics.

Now, going back to the international summits mentioned by Lavrov, they send a message between the lines, or not so much, and that is that the new US administration set a new geopolitical pattern, and that is the return of the United States to Europe. With this, he refers to the new Atlantic Charter adapted to the challenges of the 21st century, signed by Biden and British Prime Minister Boris Johnson.

The charter, without mentioning the UN but mentioning NATO as its “multilateral” platform, sets out a series of actions to expand its rules to the world using the “democracy” charter. For Lavrov, that is done to legitimize a new “rules-based order.”

At the G7 Summit, Biden and other Western officials issued a confrontational statement on the behavior of the Russian and Chinese governments, denouncing China for alleged domestic repression and criticizing Russia for cyber weapons.

The Chinese Embassy in London gave a response to these allegations, “The days when global decisions were dictated by a small group of countries are behind us.” And Lavrov in his article also replies:

Then, at the NATO Summit, the communiqué published with more than 70 exposed points directs the attack on Russia as a threat, and China as a systemic challenge. In one of their points they state: “We call on Russia to reverse its military development and stop restricting navigation in parts of the Black Sea.”

Coupled with all the recounting done, the Russian chancellor asks the question: which system of governance is the most effective in preventing and eliminating threats that have no borders and affect all people, regardless of where they live? His answer is clear and real: the formation of a multipolar world that includes respect for the sovereign equality of states, non-interference in their internal affairs, peaceful settlement of disputes, recognition of the right of peoples to determine their destiny.

This notion is key to maintaining peace and a balanced correlation of forces on the global stage. Lavrov made a masterful criticism of the Western system of rules that are alien to international law, and in concomitance, he raised the Russian proposal to really democratize international relations and establish the realities of a polycentric world order, adding to this a reform of the UN Security Council, for the Russian Foreign Minister the guarantor of peace in the world, because the anomalous over-representation of the West in this fundamental organism of the United Nations must be reduced.

In view of the great problems and challenges present and to come, mobilizing efforts to solve them is essential in this era; this is the understanding of Russia and China, whose roles in international relations are constructive. The shift towards new forms of relations between States is ever closer, and the stale policies of exceptionalism, confrontation and interference on the part of the West will be left in the abyss.

Foreign Minister Lavrov assures that Russia will always remain open to an honest dialogue with every state that maintains the willingness and readiness to maintain the balance of interests within the framework of international law.

“These are our rules,” the foreign minister concludes.