The development of Operation Bolivarian Shield 2021 has had an emphasis on the border with Colombia on the Apureño side, with clashes between Venezuelan regular forces and Colombian armed groups, including criminal groups and so-called “dissident” forces of the Revolutionary Armed Forces of Colombia (FARC) allegedly commanded by Alias Arturo and Alias Ferley, who are part of the faction commanded by Gentil Duarte.

It has been widely reported that Colombian irregular groups such as Los Rastrojos, Los Urabeños, the Autodefensas Gaitanistas de Colombia (AGC), Aguilas Negras, the National Liberation Army (ELN), among others, have projected their activities in other stretches of the binational border and into Venezuela, since in various instances these groups have found financing and backing in the logistical and financial structures of drug trafficking.

The border zone is today a diffuse space where the Venezuelan regular forces have deployed personnel and have been tasked with securing the national territory, which implies the development of governance and the ratification of the legitimate monopoly of arms and force by the Venezuelan State.

However, the recognition of the existence of a “porous border”, as stated by the Venezuelan authorities, has many implications that should be explained in order to understand the complexity of border realities and the implications of the alleged development of a “diffuse war” that could escalate to armed and open phases with greater consequences.

The Drug Trafficking Structure in the Colombian Plains

The territory of the plains has its own particularities in the development of the conflict in Colombia. Records of clashes, tolerance and sometimes coexistence of multiple groups in Arauca, Vichada and Casanare, show that this stretch of Colombian territory is still largely affected by the conflict, even after the 2016 Peace Accords.

Arauca is particular. It is crossed by two oil pipelines that are strategic for Colombian oil activity and that in the past have been blown up by guerrillas.

In 2019 the Colombian Ombudsman’s Office and the Institute for Peace Development Studies (Indepaz) of that country referred in a report to the Autodefensas Campesinas del Casanare (ACC) as an active force in Arauca, which, unlike other groups, never submitted to the peace process that “demobilized” a good part of the paramilitaries in the government of Álvaro Uribe.

In 2020, Indepaz also reported the existence of a migration process of the former paramilitary structures, now called by the Colombian government as criminalized gangs (Bacrim). This is a highly incomplete term to describe belligerent right-wing forces such as Los Urabeños, Los Rastrojos and AGC (tentacles of the Clan del Golfo) and other groups that converge to a lesser extent in the area.

Also, Venezuelan authorities’ records on the illegal entry of Colombian drug planes into Venezuelan skies reveal that they enter through the Apureño side of the border, which implies that the drug trafficking structures have the Colombian plains as a take-off zone for drug trafficking dispatches, hence the plains area acquires strategic logistical characteristics that infer a struggle between the groups for control of the territory.

There is also a complex and multinational drug structure that functions as a “franchise” model in favor of the Mexican cartels. This implies for the Colombian drug trafficking structures the development of “territorial franchises” and the construction of a logistical apparatus from the sowing of coca leaves, through laboratories for the manufacture of cocaine nitrate, to the runways for the launching of drug planes, or the launching of launches or narco-submarines.

Some of these activities take place in the plains of Colombia at the expense of the particularities of the area, as well as of the interest groups that are armed in situ. 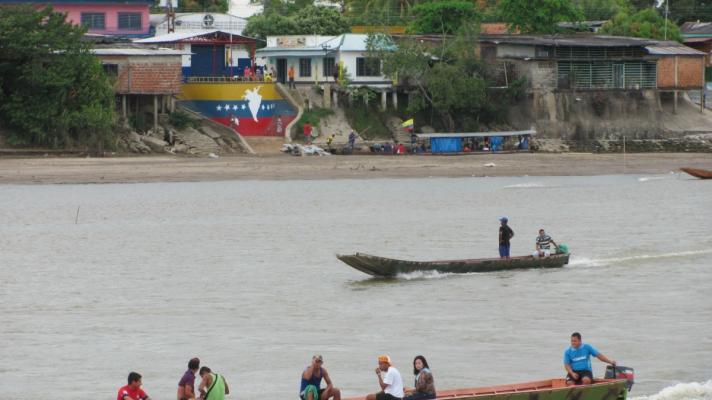 The Arauca, the Alto Apure and the plains borders

The plains of Colombia and Venezuela are, as it is often said in the plains, one and the same. The phrase refers to the absence of border lines when it comes to heritage, tradition, affection, culture and “llaneridad”.

In the border plains, the Alto Apure and the Arauca share a natural border, which is the Arauca River. It is a border that is also shifting, since it is a fluvial line, in areas with sediments that change the shape of the rivers and thus alter the border line unfavorably and favorably to both countries in different stretches.

This is due to the absence of a solid binational demarcation policy, stagnant for decades, and now that it is urgent, it is made even more difficult by Colombia’s ignorance of the legitimate authorities of Venezuela. And this imposes new singularities.

Beyond the strictly territorial borders and their demarcations, there is the so-called “social border”, which is the development of family, economic and socio-cultural ties between the inhabitants on both sides of the border.

These historical relations are usually favorable to Colombia in ways in which the radio signals of the Colombian Army invade the Venezuelan radio electric spectrum. But beyond this propagandistic display, border realities and affinities extend the frontiers into the interior of the countries.

The land of the plains has an emphasis that by topography and interculturality facilitates it. The copla and the llanero passage are musically identical as much as the similarity of the territories, from the mouth of the Cinaruco river in the Orinoco to the eastern plains of Colombia where it is born. The municipality of Paez de Apure has a gentilicio that is Colombian and Apureño, and likewise Arauquita, on the Colombian side, has a gentilicio that is also Venezuelan.

In addition, there is the oil activity of both countries in the same common basin, which has been separated by border lines. Port-to-port trade flows between El Amparo-Guasdualito and Arauquita like twin cities separated by the river.

New realities in the area

There are new singularities in the area. One of them is the development of a whole new type of economic fabric that has arisen from the new realities of the Venezuelan economy.

Historically the border population has had a great vitality and economic symbiosis, now there is the particularity that the Colombian peso and the U.S. dollar move widely. While there has been a detriment of the bolivar and a loss of monetary sovereignty in the area, it is also true that these new monetary gravitations have greatly underpinned the activities, so that Arauquita is now a site of sales of goods to Venezuelan merchants from various plains areas who buy at low prices (in pesos and dollars) to resell in Venezuela.

The monetary distortions that the country has experienced have made the price of goods in dollars so expensive that Venezuelans now “bachaque” from Colombia to Venezuela.

The illegal traffic of fuels, previously favorable to Colombia, has now been “balanced” by the smuggling of fuels from Colombia to Venezuela, due to the shortage of fuels on the Venezuelan side.

This situation is expressed in the plains of Alto Apure through the purchase of farms. Many Colombians are buying farms on the Venezuelan side at a dizzying rate.

It has also been reported that irregular groups have pressured Venezuelans to sell their farms to Colombian buyers co-opted by the mafias. Hence, the commercial conditions of the properties have facilitated the extensive mutation of Colombian properties in the Alto Apure area.

Another new element is the boom on the Apureño side of the border as a point of exit and entry into the country in recent years, a phenomenon never known in the area at current levels.

Although the ports between El Amparo and Arauquita have historically been a route for pendular migrants, the flow has increased considerably. There are many reasons for this. The increase in pendular migration (people coming and going for short periods of time for work, commercial and family reasons); the seasonal or prolonged migratory flow to and from Colombia; the flow to and from other South American countries; the flow to and from the use of airports in Colombia (cheaper for international flights than in Venezuela), are all reasons that add up.

The regular border crossings closed due to the pandemic or by government discretion, the “trochas” to Cúcuta or Puerto Santander (on the Tachira side in Venezuela), the alcabalas, the restrictions, the insecurity, the uncertainty, the abuses of officials, the abuses of “trocheros” (trochas guards) and even the connectivity to get to the border (measured in costs and travel times), have now made leaving or returning through Arauca a great attraction for many.

Hence, a new high flow of travelers has been built in this area, which has theoretically justified the placement of NGOs on the Colombian side, as well as the presence of the Office of the United Nations High Commissioner for Refugees (UNHCR) as part of a “humanitarian” deployment in the area. 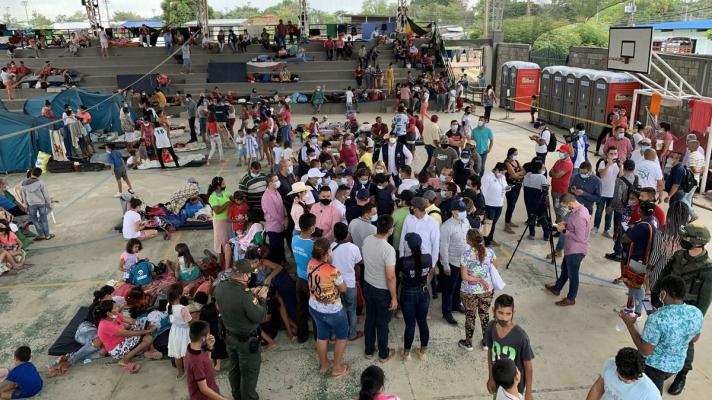 The sensitive angle of the plains

The considerations on the possibilities of a projection of the Colombian conflict to Venezuela from this sensitive angle, permeate by circumstances and historical inertias in the area, which are of extreme fertility due to the border permeability. Both old and new factors are combined. From the presence of irregulars and armed actions, to the humanitarian and NGO scenery on site, they promote the internationalization of an incipient armed conflict on the Venezuelan side.

Venezuelan authorities have denounced the possible U.S. interest in promoting a large-scale confrontation with Colombia, using irregular groups as “outsourced” factors. This is a strong element to define the place as a diffuse space under construction.

What we refer to in this text as “socio-historical inertias” consist of factual circumstances (both favorable and unfavorable for Venezuela) that have been employed by irregular forces to try to sediment Venezuelan governance and institutions in the site. The construction of de facto “micro-governments” by armed groups, coupled with economic symbioses, several of them sustained by para-economic and illegal activities, are in essence pieces in the construction of a zone of instability.

All these are historical and created circumstances are, altogether, a focus of attention for the exercise of Venezuela’s strategic security. Clear maneuvers of dissuasion and exercise of legitimate Venezuelan force registered in recent days in the area, provide a clear picture of the matter, its components, its risks and its derivations.