On Tuesday, January 19, the Social Council of the Bolivarian Alliance for the Peoples of Our America-People’s Trade Treaty (ALBA-TCP) held a meeting to coordinate efforts to guarantee member countries a massive, free access to the vaccine against COVID-19 and other medicines.

Headed by the new Executive Secretary, Bolivia’s Sacha Llorenti, the meeting followed a proposal made by the presidents of Venezuela and Cuba, Nicolás Maduro Moros and Miguel Díaz-Canel Bermúdez, for the creation of a vaccine fund for the ALBA-TCP countries.

This proposal was also part of the topics addressed by the Venezuelan Executive Vice-president Delcy Rodríguez in her visit to Cuba, where she had an intense agenda with Cuban authorities.

In an update on the situation caused by the COVID-19 pandemic in Venezuela on Sunday, January 17, President Maduro insisted on the need of meeting the needs for medicines of the Latin American and Caribbean nations in the face of the existing inequality in accessing these supplies worldwide.

The Venezuelan president recalled that the project was conceived at the 18th ALBA-TCP Summit held in December as a way to ease the "unfair and unequal" monopoly exercised by a reduced number of governments in the acquisition of most of the vaccine doses to tackle the sanitary emergency in their respective countries.

This bloc of countries was established on December 14, 2002, in Havana when then Presidents of Cuba and Venezuela, Fidel Castro and Hugo Chávez, endorsed a Joint Declaration to create the Bolivarian Alternative for the Americas (ALBA), which was inspired by the ideas of Bolívar and Martí.

Beyond a Slogan: "United Against COVID-19"

Although it sounds like a good vibes charged motto, the fact of remaining united against the most important scourge the world has experienced so far this century is outstanding, especially in a region like Latin America, where the neoliberal wave has taken over different countries and disfigured all regional integration initiatives proposed in previous years.

Governments from Brazil, Peru, Colombia, Chile, Honduras, Paraguay, Ecuador, and the recently ousted junta in Bolivia, have abandoned their people in the face of a pandemic that evinces their livelihood's fragility on a daily basis. The market-driven policies implemented by these governments push the alarming figures up in Latin America and the Caribbean in the face of COVID-19.

In this regard, Llorenti gave an overview of the COVID-19 situation in America and the world, emphasising the disease's lethality. He highlighted that, on average, more than 11,900 people per day have died; that is to say, one death every 8 seconds.

Llorenti stressed that while international institutions like the World Health Organization (WHO) have warned that only solidarity will guarantee success in the fight against COVID-19, the neoliberal system has tried to engage the pandemic following market rules.

To this criticism, Llorenti added that this is particularly cruel in relation to the vaccines that have become available for the international community. He described how "95% of vaccines are dominated by ten countries in the world… The wealthiest countries are hoarding the vaccines up to nine times the number of their citizens. Who decides where the vaccines go? The market is deciding."

Llorenti mentioned the examples of Cuba and Venezuela to counter the way neoliberal countries operate. These two nations have supported many countries in all regions of the world with staff and supplies. 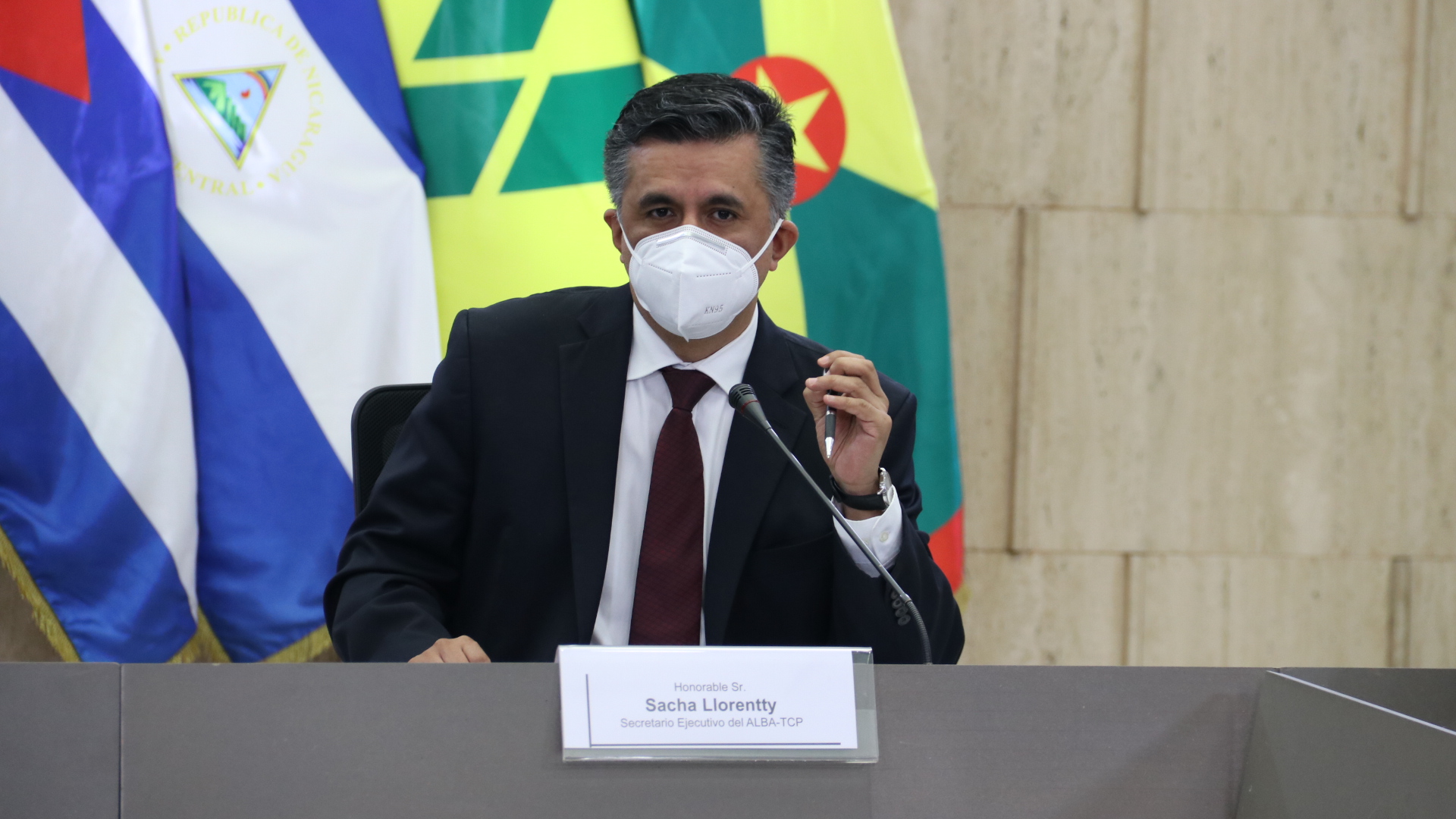 Noteworthily, the United Nations (UN) hold the leaders of some wealthy countries accountable for ignoring the needs of less developed nations and competing to purchase batches of vaccines against COVID-19. "Vaccines are reaching high income countries quickly, while the world’s poorest have none at all," warned the UN Secretary General António Guterres, who pleaded for solidarity and joint global efforts to overcome the pandemic.

The ALBA-TCP member countries shared their experiences, success and challenges, highlighting sanitary management and control strategies focused on community participation, technological developments centered on the socioeconomic rights of the population, the dispatch of international brigades to countries that have requested support to fight the pandemic, and international cooperation mechanisms where a multipolar vision has prevailed.

The Venezuelan government, represented by Health Minister Carlos Alvarado, explained how early actions, drastic and prompt measures (lockdown, use of facemasks), biosecurity protocols and the creation of sentinel hospitals have defined the success leading to low COVID-19 infection and mortality rates.

Alvarado said that "It is important to defeat the blockade. Venezuelan assets amounting to more than $30 billion have been frozen by international banks, making it impossible to use them to access vaccines against COVID-19" in reference to the unilateral coercive measures imposed by the United States and Europe against Venezuela and that were stepped up in the first 9 months of the pandemic.

Alvarado concluded by stating that "ALBA-TCP sets an example on how a common threat should be faced."

The Cuban health authorities expressed their integration will by stating: "We have not compromised our principle of solidarity. 56 Henry Reeve brigades have been deployed throughout the world. Despite the blockade, we are committed to bringing health to the people."

Likewise, they highlighted surveillance at the country’s border entry points, compliance with the WHO sanitary protocols, and health centers and posts set up to detect and attend to COVID-19 patients.

Nicaragua’s representation pointed out that their model has been based on the leading role of organized families and communities, while Bolivia’s representatives said they are working hard to procure medicines, equipment and vaccines to attend to patients against such an infectious disease.

Raúl Li Causi, president of the Bank of ALBA, recognized and congratulated the decisions made by the region’s governments to control the pandemic, and announced this financial institution will support ALBA-TCP member states to procure vaccines.

Li Causi added that "The Bank of ALBA, in coordination with Venezuelan Conviasa airline, is offering an airlift to transport vaccines and treatments." 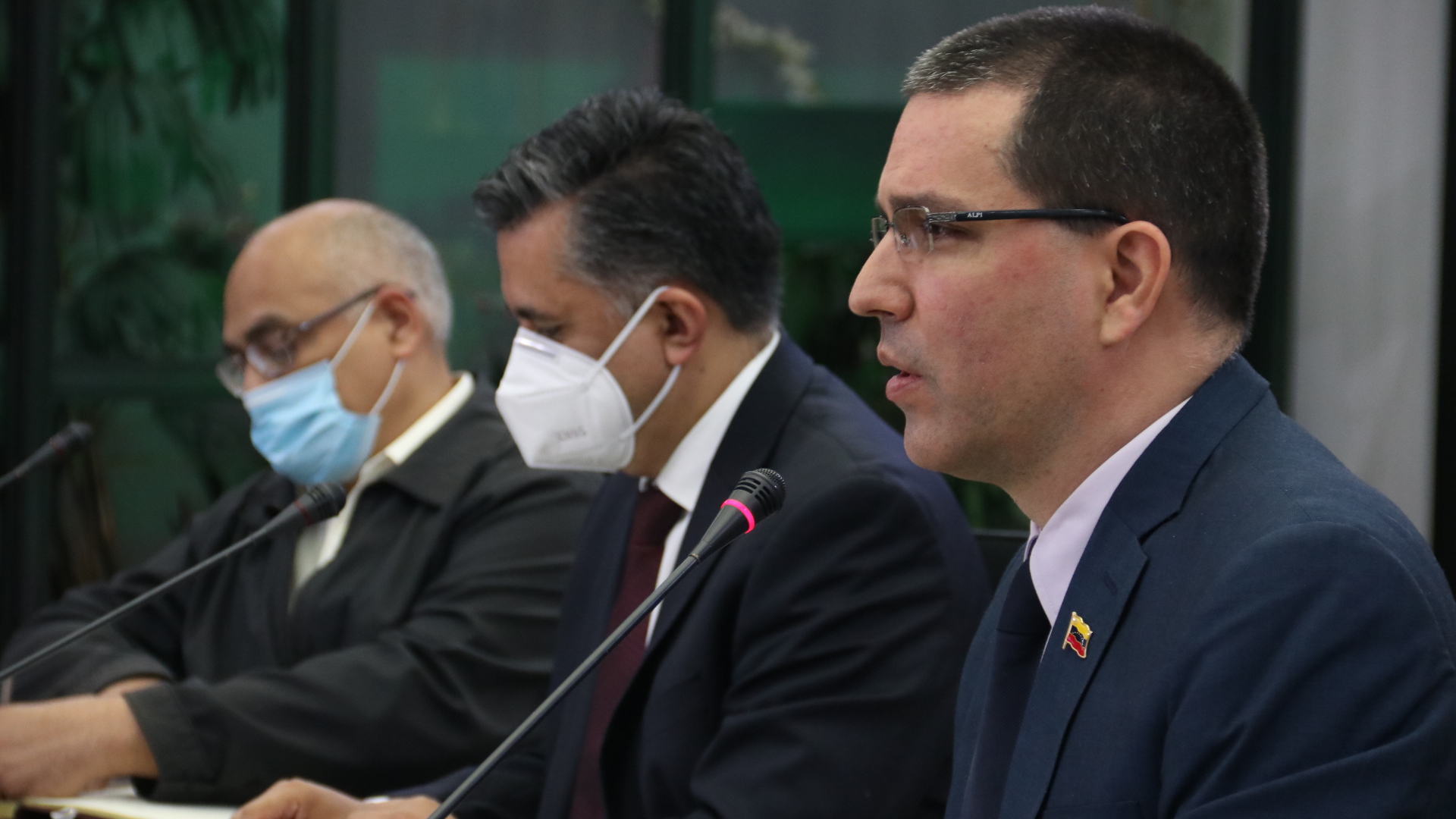 Foreign Minister Jorge Arreaza was present at the meeting of the Social Council of ALBA-TCP (Foto: Foreign Ministry of Venezuela)

The regional integration bloc is actively seeking to provide its countries with tools to overcome a pandemic that has sharpened contradictions and myths such as the "invisible hand of the market."

The agreements reached at this special meeting do not only embody decisions to address the global pandemic, they are both strategic steps to move forward against the tide of a world order imposed by plutocracy. A major effort to avoid the region’s strong states fall down that has allowed the global elites to intensify looting and to refloat a system in decay.

A key decision was to establish a Humanitarian Fund, with an initial $2 billion contribution to create a Bank of Medicines and Vaccines to improve access to medical supplies, and rapid and PCR tests, vital elements in the fight against COVID-19. This channeling of resources will be aimed at the Eastern Caribbean countries.

The ALBA-TCP members also reiterated the need of the WHO’s imperative support to have equal access to vaccines, and highlighted the importance of compiling information on the public laboratories and biological producers in Latin America and the Caribbean to know their technical capabilities for vaccine research and production.

The Venezuelan Minister for Foreign Affairs Jorge Arreaza claimed a joint negotiation with member countries will be established.

Arreaza pointed out that "we need to recall that our alliance is based on solidarity, on the most sensitive principles of union," and stressed the need of creating "a multilateral government providing the greatest sum of happiness to our peoples. We hope we can see the results of this meeting in the short term."

The Venezuelan top diplomat called on the private sector to join the airlift Conviasa will establish to transport vaccines, treatments, patients and other supplies. He also insisted on boosting the search for higher financial and human resources to fight the pandemic, and highlighted the urgency of promoting both the transfer of technology and the dissemination of scientific, technical information among ALBA-TCP countries.

The experiences exchange would enable, as pointed out by the Samuel Robinson Institute for Original Thought, the projection of the bloc as the only international organization with its own COVID-19 containment model, promoted by the successful Venezuelan controlled flexibilization, primary health care, detection of cases by using Big Data tools (Patria System), and progress made in Cuba’s four vaccine candidates.

Noteworthily, this bloc was partially torn apart by the global right wing when its governments dismantled the Union of South American Nations (UNASUR) on the basis of ideological artifices. In 2018, Argentina, Brazil, Chile, Colombia, Peru and Paraguay decided to withdraw from the group, and so did Ecuador in 2019 and Uruguay in 2020, encouraged by plutocratic pressures.

UNASUR is a South American integration organization established in 2008 to "build a South American identity and citizenship, and develop an integrated regional bloc," but it’s been idled since April 2018 due to the submission of the governments of some member countries to the extremist diplomacy of the now defunct Trump administration. Currently, only four countries remain as members.

UNASUR included bodies such as the South American Institute of Government in Health (ISAGS), whose goal was to reach consensual positions, conduct research and offer permanent assistance to the sanitary authorities of the 12 member countries.

ALBA-TCP gathers the countries featuring the best performance in containing the pandemic in the hemisphere, consolidating step by step a joint working model with global resonance, according to the Samuel Robinson Institute.

This contrasts with how other Latin American governments have performed, which started adopting measures in an asynchronous, heterogeneous way in each territory, each based on their own epidemiological experiences and research from other continents, or just by implementing improvised measures.

The result is in sight: Brazil is the second country in the world (after the United States) with more cases (more than 3 million). Venezuela, a blockaded country, offered its support in the face of a sanitary crisis in the city of Manaus due to the lack of oxygen in hospitals, triggering Brazilian president Jair Bolsonaro’s bitter sarcasm. 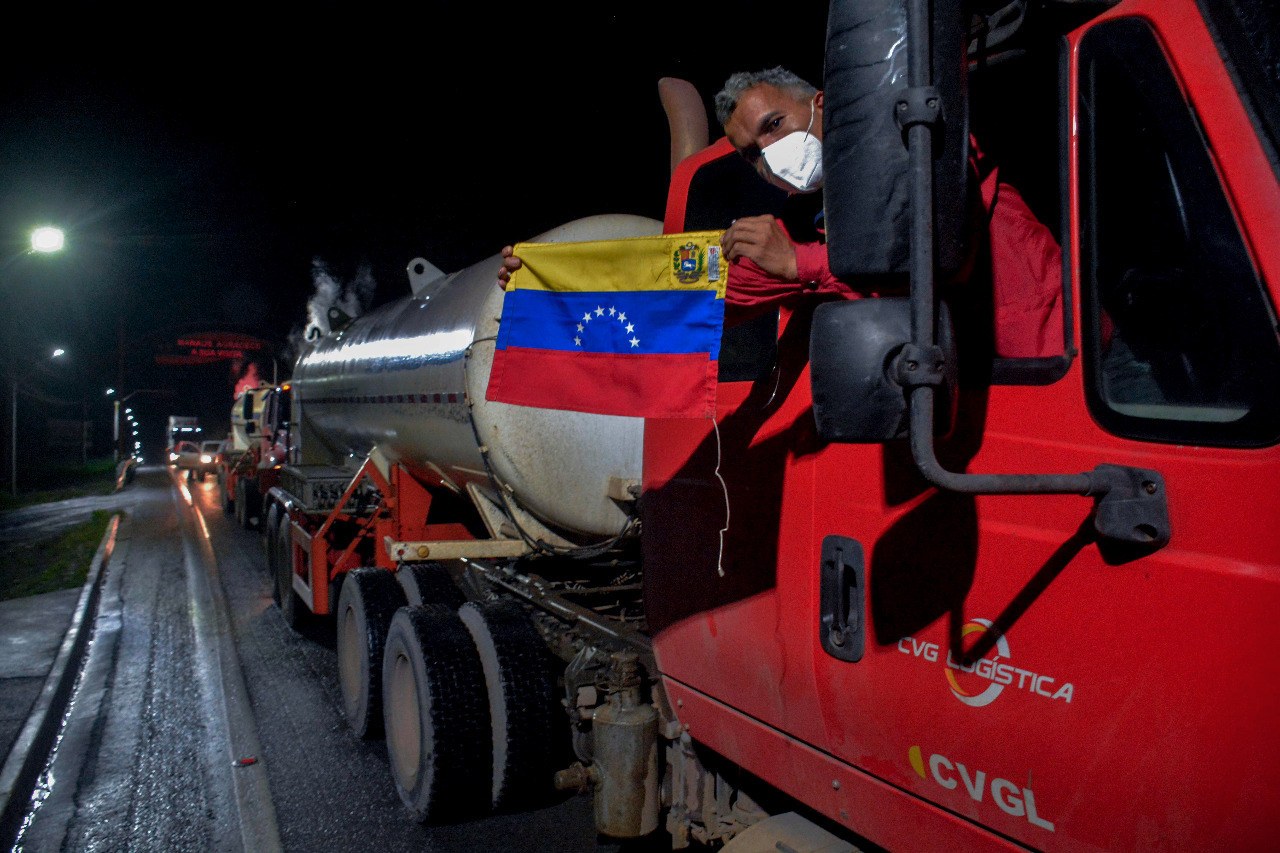 Trucks with oxygen from Venezuela cross the border to Manaus (Brazil) (Foto: AFP)

In addition, Colombia, Ecuador, Chile, Peru and Bolivia are experiencing a dramatic scenario in the face of precarious health public systems and private sanitary services taking advantage of the most vulnerable population to profit.

The ALBA-TCP’s spirit of acting as a bloc, established in 2004, is strengthened by the meeting of its Social Council as its foundation lies in strengthening the region’s power and negotiating capacities in the face of the geopolitical rearrangement of the Western powers, where the vaccine issue has become a strategic battlefield.

Translated by Foreign Ministry of Venezuela.