The second round for the presidential election in Peru is, as few others, extremely crucial for the Andean nation, both for the singularity of the preceding political framework and for the electoral political moment itself.

Peru is the only country in the world with all its former presidents in court and where lawfare has been so widespread that it has clearly disturbed the political stability of all institutions and the country.

The atomization of the traditional political forces, as well as their delegitimization, opened a gap that was crossed by Pedro Castillo and the organization Perú Libre. The new leader, coming from rural and deep Peru, burst into politics by winning in the first presidential round without first appearing in the polls as a probable winner.

His counterpart, Keiko Fujimori, comes from the inheritance of her father Alberto and her brother Kenji Fujimori in parliament. All right-wing forces have joined her candidacy and the Peruvian media and businessmen have clearly aligned themselves with her.

Castillo began the route to the second round with more than 15 points of advantage over Keiko, but after weeks, in the heat of the campaign and with the alliances that Fujimori has achieved in her favor, without forgetting the established position of the media, Castillo’s advantage was reduced and the preference for Fujimori increased.

According to electoral statistics, due to Fujimori’s vertiginous rise and Castillo’s clear decline, it was foreseeable that both candidacies would be at least evenly matched 15 days before the election. But the statistics stagnated.

On May 22, a study was published that showed a result that overturned the previous trend. It reflected the consolidation of Pedro Castillo in first place. According to Datum’s figures, elaborated for the tabloid Perú 21, Castillo went up a point and a half, consolidating his position with 45.5%, while Fujimori dropped almost a point, registering 40.1%. In the same context, the blank vote increased to 9.1%.

Urpi Torrado, director of Datum, considered that the mock election confirms the increase of preferences for Pedro Castillo and the electoral support for Keiko Fujimori stagnated. “In the case of Castillo we see in this last measurement an increase. In the case of Keiko Fujimori, in this last measurement we see that there is no major change with respect to last week,” he said.

In the most recent poll of the Instituto de Estudios Peruanos (IEP) for La República, published on May 23, it is revealed that the presidential candidate of Perú Libre, increased the advantage over his contender of Fuerza Popular, Keiko Fujimori.

The union leader obtained 36.5% support, while the representative of Fujimori obtained 29.6%. The study also stated that 23.6% of the citizens would vote blank or null; meanwhile, 7.8% said that they had not yet decided who to elect.

The latest poll by IPSOS Peru, for América Televisión, shows that Pedro Castillo has 52.6% of the valid votes, while Keiko Fujimori obtains 47.4% of the electoral preferences. The difference between both candidates is 5.2%. In the same frequency, the blank vote is 14.3%. 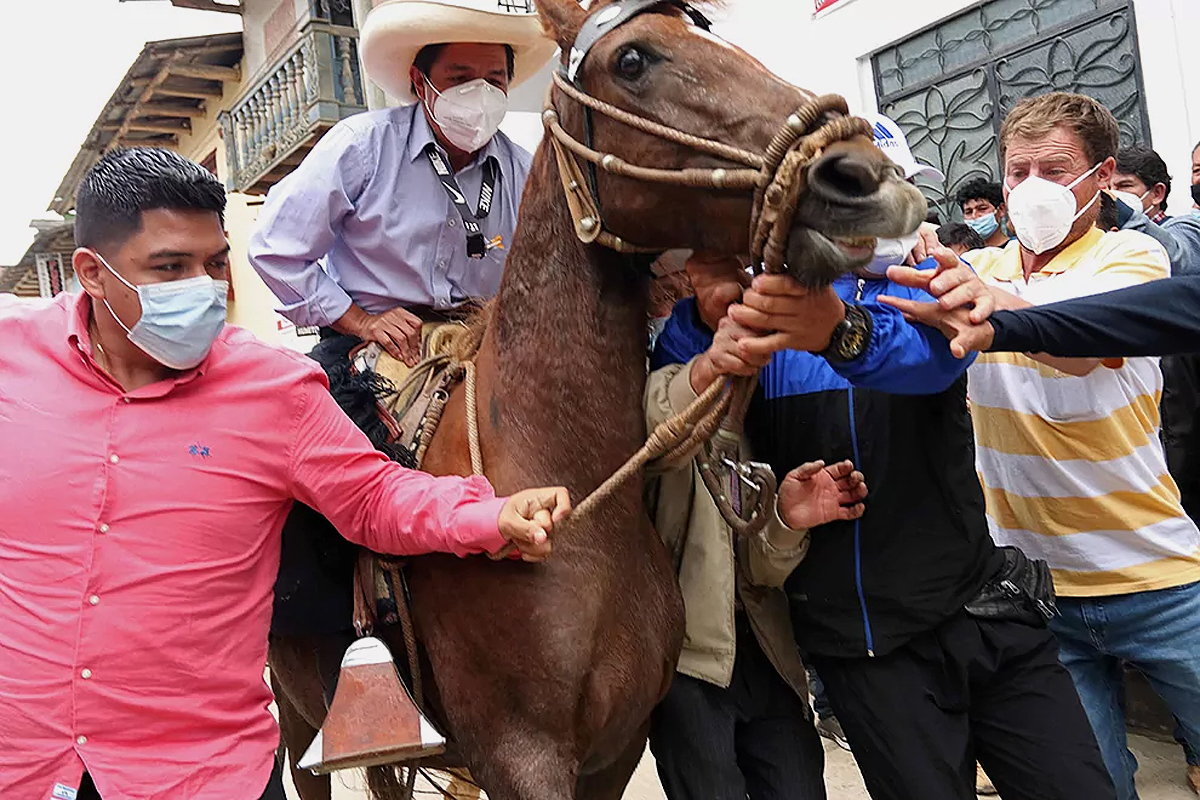 Preferences have a geographical composition. Keiko dominates in Lima and its metropolitan axis, which groups 30% of the electorate, while Castillo leads in all the rest of the national territory, especially in towns and small cities, as if recreating a dispute between urban and rural Peru, not only for the preferences of the voters, but also for the origin of the candidates themselves.

Meanwhile, the vote also has a class composition. The D and E sectors, the most dispossessed, support Castillo while Keiko dominates in the more affluent sectors, as if recreating a dispute between social classes, not only by the preferences of voters, but also by the origin of the candidates themselves.

However, and beyond the numbers in relief, this election has, however, the possibility that the so-called “hidden vote” factor, which in fact already appeared in the 1st round, may burst in. Castillo obtained an unexpected 19.1% without that figure or any figure similar to it appearing on the radar of any pollster.

This indicated that, in effect, the measurements were not at all accurate and an important segment of the Peruvian population was not addressed by the polls.

Although the pollsters may have improved their sampling to correct this, it is still likely that this situation will reappear, even more so when many of Castillo’s supporters, rural residents, are not being approached by telephone or in person and in many cases refuse to respond to polls.

The big statistical difference in the polls before the 1st round, as opposed to the actual result, was largely among those who declared themselves undecided or who would vote null. This is where many of Castillo’s hidden voters came from.

Polarizing events and a bloodbath

Over the past weekend there were demonstrations in Peruvian cities, especially in Lima. Protests were raised, not proselytizing, but anti-Keiko. The #KeikoNoVa movement, which has already appeared in the presidential campaigns where the candidate has run, reappeared with great strength and appeal. 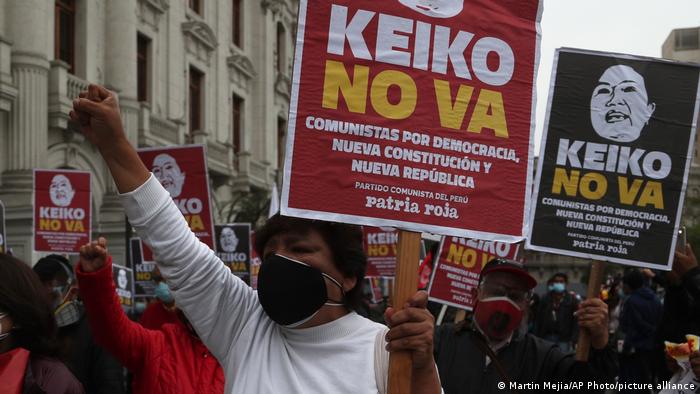 It is not usual that in an electoral campaign politically heterogeneous expressions of rejection to a candidate appear. In a country where voting is mandatory, as in Peru, by default these massive protests polarize the picture in favor of Castillo and in favor of the white vote, which also favors Castillo.

Meanwhile, Castillo’s candidacy is completely outside the canon of “political correctness” in line with the campaigns of traditional, sweetened and moderate leftist forces. This one is vigorous because of its strong anti traditional political class discourse, which has a great impact on an electorate exhausted by the loop created by Fujimorism and the other traditional parties.

Castillo’s rhetoric, almost unrestrained, based on the imaginary of rural and marginalized Peru, on class feelings and on a plain and accessible language, has the challenge of promoting a credible electoral offer to narrow the gap with Keiko in Lima, to shield his victory. Meanwhile, Keiko has put all her eggs in one basket, attacking Castillo and accusing him of being a Chavista and communist, and promoting a business, neo-liberal, but “new” government.

The “Venezuelan” factor in Peru has appeared as a non-formal campaign element, but clearly articulated in the campaign styles in that country, with its “Prensa Chicha” style tonalities, now in its modified version in social networks, that is to say, based on yellow journalism.

The use of Venezuelan migrants in Peru in videos and photos used in the campaign, warning about the “dangers of communism”, became viral trends, clearly promoted as paid content and the use of the algorithm of the networks to position matrices.

COURAGEOUS TESTIMONY OF VICTORIA TRUBNIKOVA, UKRAINIAN CITIZEN WHO LIVES 7 YEARS IN PERU AND TELLS WHAT IT’S LIKE TO LIVE IN COMMUNISM.

However, a bloody event erupted. The murder of 18 people in a rural community, among them women and children, allegedly by remnants of the Shining Path terrorist group set off alarm bells.

The sad events took place in the province of Satipo, where Castillo won comfortably in the first round. Curiously, pamphlets left by the terrorists were found in the place, where they urged not to vote for Fujimori, reviving the times of Fujimori’s own presidency, who confronted this organization that was the government’s number one public enemy.

Castillo had already been accused by Fujimorismo of being linked to the Shining Path, and after a consistent campaign along those lines, this event suddenly appeared.

Indeed, this is not the first time that a leftist leader has been accused of being linked to the Shining Path. Former president Ollanta Humala, in his last election, was also accused of being linked to this group when an attack took place on the eve of the election. The Swissinfo media produced a chronology of these attacks on the eve of elections: they have occurred in 2016, 2014 and 2011. In 2011 and 2016, Keiko Fujimori was a presidential candidate and also used these attacks as a campaign theme, it is worth mentioning.

Potestà believes that in the area where the attack occurred, “there will be an intimidation of the population” and that “there will probably be absenteeism” on voting day. In the rest of the country or in Lima, the analyst believes that the attack will have an impact on political debates.

“At the debate level, one of the two candidates should appropriate the anti-terrorism issue. There could be a favoring of the candidate who offers concrete and proven solutions against terrorism”, says Potestà. The “iron fist” discursive axis is clearly in favor of Fujimori, both because of her family background and her campaign narrative.

Given the recurrence of these attacks, Potestà recognizes that some people could “open a window of suspicion” to this latest attack and ask “where it comes from, who did it, what interests are involved”, or “if this was an orchestrated attack, seeking to favor some candidate”, he told the BBC.

There is right now a dispute over the narrative, over who these facts favor, and evidently many suspicions go against Fujimori, both for her family background and their false flag operations, as well as for the candidate’s discourse. Hence, an unofficial confrontation is developing in the campaign, where in the media and in networks the inevitable political balance is disputed and settled. Will this be able to change the current preferences? It is yet to be determined, because although that is what shocks are for, they are not always conclusive or definitive.

Regarding the accusations against him, Castillo used his own particular verb and put the accusations to rest in order to clear doubts. The candidate proposed to the president of Peru, Francisco Sagasti, that the authorities include him in the investigations of the case to rule out his involvement. “Let them start with me and my entourage, with Pedro Castillo and his command”, he emphatically emphasized.

In this way, the campaign is reaching its peak and with a little less than two weeks to the election, there is no doubt that this event is relevant as few others because of the repercussions it will have, whatever the result may be.

The development and end point of this stretch will have a synthesis in this dispute, between continuity and hope. This is precisely what both candidates represent, as if it were a dispute between the Peru of the past and the Peru of the present and the future. As we said above, not only because of the preferences of voters, but also because of the very nature of the candidates.