This month of June commemorates two crucial dates in the long struggle of the Saharawi people for independence and self-determination, first against Spanish colonialism and then against Moroccan expansionism, which has lasted more than 50 years.

This epic struggle was part of the national liberation struggles of the African peoples for their emancipation. The second half of the 20th century was characterized by the rise of independence battles on the African continent. In 1960, twelve countries achieved independence. It should also be noted that three new states (those bordering the territory of Western Sahara) emerged from colonialism around the same time: Morocco in 1956, Mauritania in 1960 and Algeria – after a long and bloody struggle in which more than one and a half million people lost their lives – in 1962. Today, Western Sahara is the only colonial territory on the African continent.

The international scene of popular struggles against the scourge of colonialism found receptive ears in the hitherto so-called “Spanish Province of the Sahara” in which, in the late 1960s, the first nationalist and anti-colonial movement was founded, which after its creation advocated the peaceful struggle as a means to achieve national independence.

The new structure called “Movement for the Liberation of the Sahara” (MLS) set out to peacefully claim independence. Within a very short period of time, the organization incorporated hundreds of militants among workers and employees in industry, officials of the colonial administration, students, non-commissioned officers and soldiers. Led by Mohamed Sid Brahim Basiri, father of Saharawi nationalism, it was literally dismembered by Franco’s military forces on June 17, 1970, following the historic demonstration of Zemla (popular district of the Saharawi capital), when militants of the independence movement and the population in general took to the streets to peacefully reject the Spanish colonial presence and demand the implementation of UN resolutions, especially resolution 1514 (XV) of 1960, the backbone of the international doctrine of decolonization, which includes the principle of granting independence to colonial peoples and countries through the exercise of their right to self-determination.

This historic deed, which cost countless human lives of defenseless civilians, dozens of wounded, imprisoned and the disappearance of the highest Saharawi leader at the hands of the Spanish army without his fate being known until today – 51 years later – marked the first step on the long road of the Saharawi people towards freedom.

Shortly thereafter, this process led to the emergence of a genuine national liberation movement with a politically consolidated program and the choice of armed struggle as the only possible way to eradicate Spanish colonialism from Western Sahara.

The foundation, on May 10, 1973, by a group of young Saharawis led by El Uali Mustafa Sayed, of the Popular Front for the Liberation of Saguia el Hamra and Rio de Oro (Polisario Front), recognized by the international community as the only legitimate representative of the Saharawi people, is undoubtedly a turning point in the recent history of this people, insofar as it opens a new and higher stage in their struggle towards the final emancipation.

El Uali was born in 1948 somewhere in the Mauritanian desert. His Saharawi family was nomadic and dedicated itself to raising goats and camels. His childhood was spent in conditions of extreme poverty, but he managed in difficult circumstances to attend elementary school, which he was able to finish thanks to a great will and effort, which earned him a scholarship to study in Morocco. However, he was expelled from the high school where he was attending secondary school and was forced to return to the community where his family was, starting to work as a laborer for a very short time, after being fired.

In these conditions, he moved to the city of Taroudant, where he had his first contacts with the ideas of independence of his people. He was able to continue his high school studies and entered university in 1970 to study law.

At university he became an activist for the cause of the Saharawi people. Following the events in Zemla, the brutal repression and the disappearance of Brahim Basiri, he took up in 1971 a full-time dedication to the liberation of Western Sahara. He traveled to Europe and established contact with popular and democratic organizations of that continent and Morocco to seek support for the anti-colonialist struggle, however, not being more successful, he became convinced that the Saharawi people should obtain their independence through their own efforts. He was arrested and tortured on two occasions for his inveterate participation in the struggle of the Saharawi people.

Thus, he turned to the creation of a political organization that would bring together all the Saharawi people. For this reason he traveled through Morocco, Algeria and Mauritania, in addition to much of the territory of the Sahara, until that May 10, 1973 saw the birth of the Polisario Front, which in its first manifesto states that the organization “… is born as the unique expression of the masses, which opts for revolutionary violence and armed struggle as a means, so that the Sahrawi people, Arab and African, can enjoy their total freedom and confront the maneuvers of Spanish colonialism”. 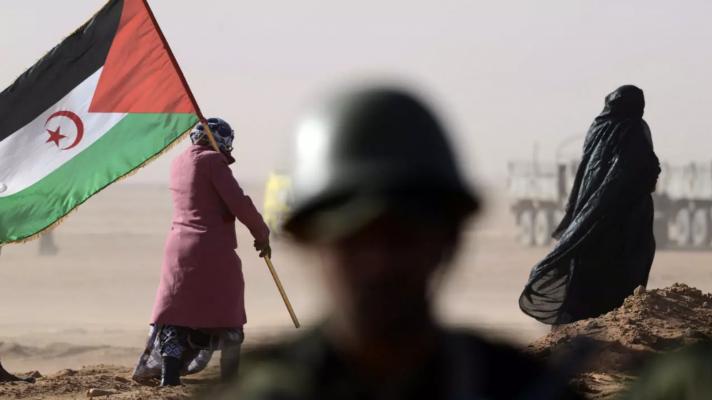 As leader of the Polisario Front, El Uali led the first military actions against the Spanish army. These were years of advancement and growth of organizational activity as the war unfolded in incipient form at the very moment when it was ending in much of Africa, while a host of new independent states were emerging on the continent. Similarly, the Saharawi people were beginning to identify with the Polisario Front as an organization defending their right to self-determination. In this context, El Uali was consolidating himself as the undisputed leader not only of the Polisario Front, but also of the Saharawi people as a whole.

The weakness of the colonial system in Africa was directly related to the unstoppable advance of the struggle of the national liberation movements. In the case of the Sahara, the fragility of the Franco dictatorship associated with the illness of its mentor also intervened. In this context, Spain, faithful to the historical cowardly and ambiguous mood of its monarchy and political class, reached an agreement with Morocco and Mauritania to allow the two African countries to appropriate the Saharawi territory. Morocco invaded the Sahara, occupying by force an important part of the country, while Mauritania did the same from the south.

A good proportion of the population had to emigrate and take refuge in neighboring countries, especially in Algeria which assumed from that moment and until now a solidarity of great proportions with the Saharawi people and with the Polisario Front.

On February 27, 1976 the Sahrawi Arab Democratic Republic (SADR) was proclaimed and El Uali was appointed as its first president. This marked the beginning of a new stage on the road to independence, in which the armed struggle against the new aggressors increased.

In one of those actions, carried out in Mauritanian territory, on June 9, 1976, El Uali gave his life when, at the head of a group of fighters, he was withdrawing from a direct operation in the capital of that country which had been defined as the weakest link of the colonial alliance, and where most of the military efforts were directed. His enduring example would mark the mark of the Saharawi freedom fighters. In his honor, every June 9th is commemorated the Martyrs’ Day as a remembrance and memory of who is considered the greatest hero of the Saharawi people.

His death did not stop the struggle. In 1979 Mauritania withdrew defeated from the Sahara, unable to resist the constant offensive of the Saharawi Liberation Army. In 1982, SADR was recognized as a full member of the Organization of African Unity (OAU), now the African Union (AU).

The war continued until 1991 when a cease-fire agreement was reached with Morocco under the auspices of the UN, which was to organize a referendum on self-determination for the Saharawi people. However, 30 years later, the situation remains the same: Morocco continues to occupy a large part of the territory of the Sahara while its people, under very difficult conditions, continue to resist in their quest for independence.

The UN, wrapped in a cloak of complicity with Morocco as well as Europe, especially France and Spain, has submitted to the blackmail of the medieval and rotten Moroccan monarchy to finally, in collusion with it, maintain an anachronistic colonial status inexplicable in the 21st century.

Meanwhile, the Saharawi people and the Polisario Front as its sole representative, without any hesitation, maintain their unshakable feeling and will for independence. In this development, the indelible memory and the examples of life and dedication of Mohamed Sid Brahim Basiri and El Uali Mustafa Sayed will continue to point the way that will lead to victory and independence.