The notion of “conuquera” is based on an ecosystemic vision in which everyone and everything is interrelated, and a culture that seeks to bring together what capital fragments.

Not only is it opposed to capitalism because it is not part of its controlling and concentrating logic, but also, against all odds, the conuco is unhinged from its capacity to generate crisis, that which today puts the existence of some ecosystems in imminent danger, as well as the possibilities of human life on the planet.

The advance of financial capital and transnational corporations over all aspects of agriculture and the food system of the countries and the world has taken shape both in the privatization of seeds and the sale of agro-toxins and in the hegemonic dominance in the purchase of crops, the homogenization of food processing, its transport, distribution and sale to the consumer, all concentrated in a small number of companies.

Food, instead of being a human right, has been turned into a commodity. Our diets have also been homogenized and globalized with foods whose excess calories and additives cause non-communicable diseases that today, for example, exacerbate deaths from Covid-19.

Moreover, their prices are increasingly inaccessible because of capitalist speculation on future purchases while eroding the culinary traditions of our peoples.

This is coordinated with a capital offensive on common goods (natural resources) comparable only to the colonial plundering of five centuries ago. A system that privileges the accumulation of capital has waged a war of dispossession against peasants and indigenous peoples by privatizing lands, territories, forests, biodiversity, water and subsoil for agro-export and mining.

With the crisis of capitalism, the elites gave birth to a Donald Trump whose thuggish behavior is an expression of the total assault on our mine-countries. The speculation that finance capital makes on food and land, to the detriment of the people, led to the assault on public funds for financial rescues in 2008; it will also happen in this 2020 with the excuse of the global pandemic, and the working classes will pay for it with budget cuts. 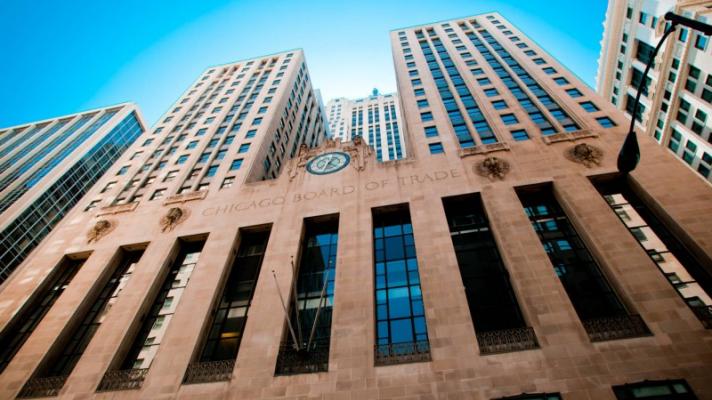 The companies that control the food system used the 2008 crisis to generate extreme profits, and it is possible that the same thing is happening right now. That year the food crisis unleashed a wave of treaties and private investments, both in agriculture and in land grabbing, which spurred the expulsion of large numbers of peasants from the countryside and, with them, their culture.

Hunger and malnutrition are growing at the pace of labor exploitation and infinite forms of violence, the economic contraction in rich countries is increasing, xenophobia against migrants fleeing from the wars that those same countries sponsor, racism and repression are growing, and the dominant model offers fewer and fewer opportunities and jobs for young people in the countryside, causing their outright abandonment.

An imminent impact… For whom?

The global environmental crisis is intertwined with the systemic crisis described above because those who control the economic system not only determine the extraction of goods from nature and humanity, but also impoverish the great majorities in that task. The impact is of such a dimension and so irreversible that different authors speak of anthropocene or capitalocene.

Access to drinking water is one of the most serious dimensions of this crisis. The number of people living in places with water shortages is expected to increase from 2 billion in 2020 to 4 billion in 2050. Different models also estimate the presence of more droughts, floods, hurricanes and uncontrolled fires; storms caused by climate change alone could flood 3 million hectares of agricultural land in coastal areas. 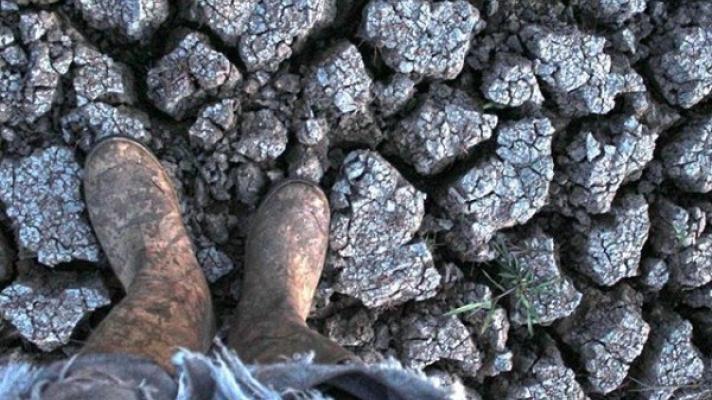 The impact of the globalized food system centered on monoculture and agro-industry on the possibilities of human life on the planet is decisive, especially its contribution to the global environmental crisis, which includes not only climate change, but many geochemical processes on which the synergistic existence of societies and ecosystems also depends.

A study by Oxford University in 2018 reveals some data on this system:

The conuco as a living ecosystem

Local agriculture, in particular conuco, is opposed to this agro-food model of industrial monoculture that is strongly associated with the advance of the global systemic crisis due to practices that are more a matter of waste and profit than energy efficiency.

One of them is the amount of fossil fuels burned in the transport of food in long distances releasing important tons of CO2 to the atmosphere, while conuco energizes the local markets of seasonal items.

Both ancestral and innovative practices, incorporated by local and popular knowledge, are opposed to the intensive use of inorganic fertilizers that disrupt natural soil processes. The conuquero task allows the accumulation of carbon in the organic matter of the soil while the monoculture replaces it with biogeochemical processes that accelerate the production of an important amount of nitrous oxide (NO2), the GHG that occupies the third place as a cause of atmospheric heating.

Some ecosystems, such as tropical forests, swamps and wetlands, accumulate more carbon than others, which has contributed to stabilizing the climate for tens of thousands of years. The burning of forests and deforestation for monoculture plantations reverse this process.

Some ecosystems, such as tropical forests, swamps and wetlands, accumulate more carbon than others, which has helped stabilize the climate for tens of thousands of years. The burning of forests and deforestation for monoculture plantations reverses this process. 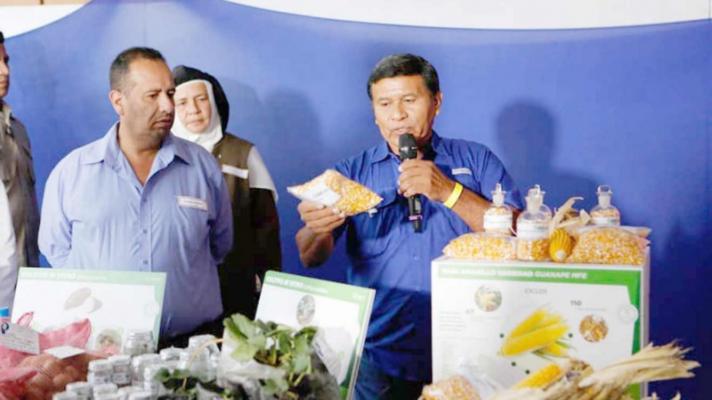 Conuquero Pablo Characo showing the variety of corn “Guanape” from eastern Venezuela whose genetic conditions make it have a higher concentration of protein and resistance to pests than imported seeds and less dependence on agrochemicals. (Foto: Archive)

The physical-chemical “sense” of plants and agriculture is to transform solar energy into energy contained in sugars and cellulose that can be directly absorbed in food or transformed by animals into fats and proteins, thus providing energy in the food networks.

However, agro-industrialization has generated an agriculture that consumes more energy than it produces using tractors, petroleum-derived agro-chemicals, fertilizers, etc.

Integrated production goes beyond the separation of crops and animals; if the concentration of animal production were eliminated and the raising of various animals were integrated with crop production, nutrient cycles would be established that would increase the efficiency of their use, thus giving an ecosystemic sense to the activity.

Methane and nitrous oxide emissions from manure hills and oxidation ponds would be eliminated, and mass transport of industrial animal feed or frozen meat around the world would be avoided.

The quality of natural animal feed could be improved by reducing the production of methane (CH4) from cows, sheep and goats.

A future horizon is in the soil

In the last 50 years, monoculture has caused an average loss of 30 to 60 tons of organic matter per hectare of agricultural land. In total, between 150 and 205 billion tons have been lost due to the large amount of waste caused by its processes.

Grain estimates that using sustainable agricultural techniques such as conuco it is possible to progressively increase the organic matter in the soil by an average of 60 tons per hectare over a period of 50 years, two-thirds of the excess CO2 currently in the atmosphere.

This would also contribute to improving soils and food production, improve the capture and retention of water needed for resistance and resilience (endurance and flexibility) to the climate crisis, which is also water.

Soils and landfills would emit fewer tons of NO2 and CH4 into the atmosphere; this would make fertilizers progressively unnecessary because nutrients would be recovered.

By cancelling and progressively reversing monoculture plantations by supporting diversified systems that incorporate trees and forests, it would increase soil fertility by incorporating organic matter.

Decentralizing life as a route to living

On the other hand, the implementation of the conuco, redesigning some existing populations or creating new ones, would allow many local communities to live off the land by improving sources of employment and fighting hunger.

The tactical and strategic aspects involve decentralized forms of work, but articulated in communities and organizations that participate and make decisions on how to generate change.

If most food were traded in local markets then the basis of our nutrition would be fresh or locally processed food and at home; food processing would be domestic or slightly industrial; transportation of food around the world would be reduced, also refrigeration periods before or after sale; food packaging would be simpler and not so dependent on plastic.

Other decisions such as progressively decreasing the consumption of non-food agricultural products such as palm oil and excessive meat consumption would be complementary, also abandoning businesses such as agro-fuels and implementing decentralized forms of energy production.

In the Venezuelan case we have experienced in the last 20 years the blackmail of the population by industrial agriculture companies that produce goods for the international market instead of food obtaining an enormous accumulation.

The most profound and destructive transformation that the industrial food system entails is the industrialization of the livestock sector which has grown five times in the last decades, contributes to the climate crisis in a dramatic way and has helped to cause the problem of obesity in rich countries while destroying local meat production in poor countries through subsidies and unfair trade.

Corporate power has been concentrated on maintaining a growing and expanding trade system that claims to “create jobs” when it takes away the surplus value from those who work, while causing empty rural areas, overcrowded cities, and the destruction of many livelihoods and cultures in the process, all with the support of academics and decision-makers co-opted or obsessed with the imaginary of infinite growth.